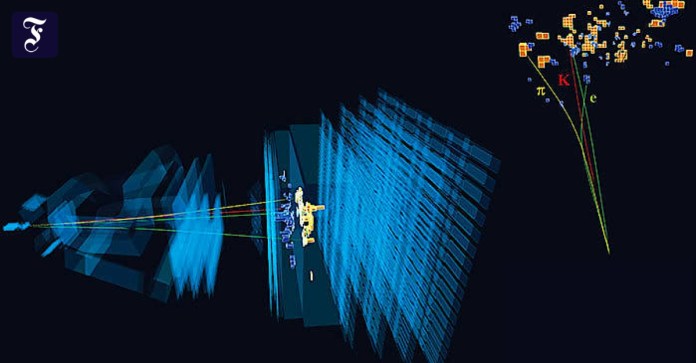 Se since the discovery of the Higgs boson – the last missing building block of the Standard Model – nine years ago, particle physics seems to be treading on the spot. New particles or previously unknown physical effects have not yet been seen in any of the large particle accelerators. The hopes for a new physics beyond the standard model are quite justified. Because the world model of the structure of matter cannot explain many phenomena – such as the existence of dark matter and dark energy. Now a message from researchers of the LHCb experiment at the European research center Cern near Geneva makes you sit up and take notice. According to this, an observation was made during the decay of so-called B mesons that is not compatible with the predictions of the Standard Model, should it be confirmed.

B mesons consist of heavy bottom quarks and are generated in large numbers at Cern when high-energy protons collide with great force in the “Large Hadron Collider”. However, these exotic particles only live for a fraction of a second. When they decay, electrons and muons and their antiparticles are also formed in extremely rare cases. These elementary particles, which belong to the lepton family, should actually appear in equal numbers. After all, the interactions that dominate the decay of B mesons make no difference between the muon and the electron according to the Standard Model. But this “lepton universality” seems to have been violated.

Is the signal really real?

The scientists in the LHCb experiment, who have been precisely measuring the properties of the B mesons for several years, have repeatedly measured a slight excess of electrons. However, the statistical significance for this has so far been too low to be able to make clear statements. The researchers then analyzed the data measured in 2017 and 2018. Finally, the energy and intensity with which the proton beams collide in the LHC has almost doubled. This also increased the number of rare B meson decays recorded. And indeed, the earlier findings now seem to have been confirmed. As the researchers report in their publication on the online database arXiv.org, the measured ratio of emitted muons to electrons is 0.85 instead of 1.0, as required by the standard model.

The significance of the measurements has increased from the original two sigma to 3.1 sigma. (This means that the probability that the measured signal is real is around 99.9 percent). But that’s not enough to speak of a real discovery. This assumes a significance of five sigma, which corresponds to a probability of 99.9999 percent.

That is why it is still too early for final conclusions, admits Nicola Serra from the University of Zurich, who was involved in the measurements with his colleagues. However, the new anomaly is consistent with the pattern of anomalies that has emerged over the past decade. Physicists from the BaBar experiment at the Stanford Linear Accelerator Center also found a slightly lower number of muons in B meson decays. However, the uncertainty of the measured ratio of the two types of particles is clearly too great.

In order to be absolutely sure whether the lepton universality is really violated, the researchers of the LHCb experiment would need significantly more data. These can only be delivered in the coming year, when the Large Hadron Collider is back in operation after a conversion phase at Cern. Then even more protons with an even higher energy will collide, which will also produce more B mesons. This should also improve the statistics of extremely rare particle decays. In the meantime, however, the Japanese particle accelerator “SuperKEKB” in Tsukuba could also help clarify the situation. Recently, when electrons and their antiparticles, the positrons, collide, B mesons have also been produced in large quantities.

If the deviation measured in Geneva is actually confirmed, this would be a clear sign of physics beyond the standard model. A new interaction in addition to the four known basic forces would come into question. This fifth force, if it exists, would couple with different strengths to the electron and the muon, which is 207 times as heavy. A previously unknown elementary particle could also be behind a violation of the lepton universality. The so-called lepto quark is traded because it couples to quarks and leptons at the same time. This hypothetical particle can explain why the charge of a proton and electron – apart from the sign – has the same value. Or why there are just as many quarks as there are leptons, namely six each. Questions to which the standard model also has no answers.

It is therefore understandable that so much attention is currently being paid to the results of the LHCb experiment. But caution is advisable. In particle physics, too, quite a few signals dissolved into nothing when they were measured again more precisely.

Some US Republicans plan to object to Biden’s election