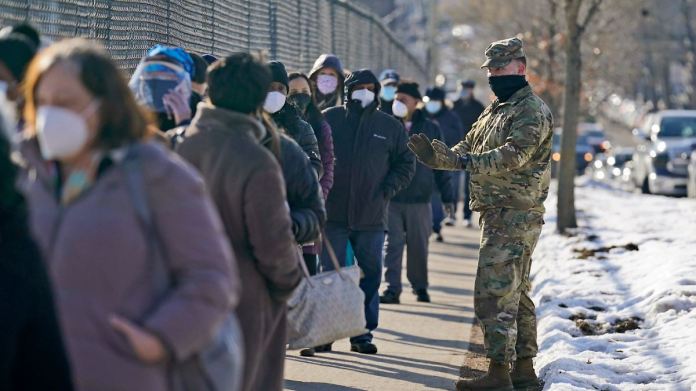 When it comes to vaccination, New York is betting as much as possible as quickly as possible. The Johnson & Johnson vaccine is now to be injected into people at any time of the day or night until all doses have been administered. At the same time, corona measures are being relaxed.
With the first delivery of the corona vaccine approved in the USA by the US corporation Johnson & Johnson, several vaccination centers in New York should now work around the clock. In the Yankee Stadium in the New York Bronx, in the convention center Javits Center in Manhattan as well as in a vaccination center in the north of the state of New York vaccination should be done around the clock until the first 164,800 doses of the vaccine expected this week have been administered, said Governor Andrew Cuomo at a press conference.

Unlike the other previously approved vaccines, the Johnson & Johnson vaccine only needs to be injected once. So far, around 15 percent of people in the state of around 19 million people, which was the epicenter of the pandemic in the United States last spring, have received at least one dose of a corona vaccine. The Johnson & Johnson preparation is the third corona vaccine to be approved in the United States.

At the press conference, Cuomo also promised further smaller easing – for example, the number of people who are allowed to meet in the open air is to be increased. Most recently, cinemas in the metropolis of New York were allowed to reopen with restrictions. However, the Democratic governor Cuomo warned against easing too quickly, as he is observing in other states. For example, the Republican Governor of Texas, Greg Abbott, announced that he would lift the mask requirement and all capacity limits for restaurants and other businesses in his state.

Municipalities: Now life in Germany is getting more expensive

Corona! Saxony will send schools and businesses into tough lockdown...

Withdrawal of US troops to be stopped – SWR Aktuell Four communities in South Tyrol are largely cordoned off due to...

“Falken” on the rise: Kapfenberg inflicts fourth bankruptcy on Steyr –...

“We don’t want to be frozen in time!”