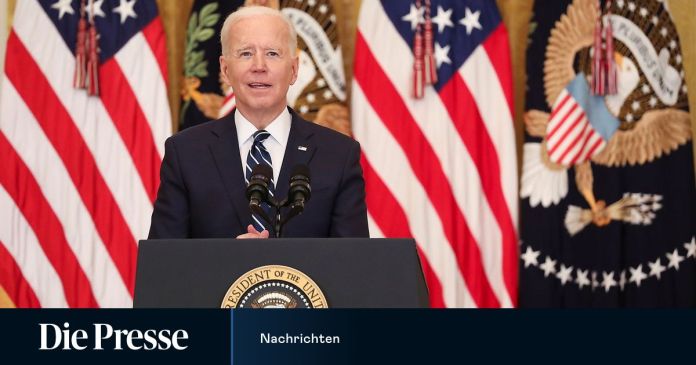 78-year-old Biden said it was his plan to run. Meanwhile, his government is doubling its vaccination target to 200 million first vaccinations by mid-April.

US President Joe Biden plans to run for a second term in the White House in 2024. “The answer is yes, my plan is to run for re-election, that’s my expectation,” said the 78-year-old Democrat on Thursday at his first press conference since taking office when asked. When asked whether he wanted to run again with his deputy Kamala Harris as a runner-up candidate, Biden said that he would also expect that.

He does not know whether he would compete against his predecessor Donald Trump in 2024, Biden said at the press conference. Trump has so far left it open whether he wants to run again after his loss to Biden last November. To this day, Trump complains that he was fraudulently deprived of victory in the election. He did not provide any evidence of this. The Trump camp failed with dozens of lawsuits in courts in various states against the election results.

Biden has also announced that it will double its target for the ongoing corona vaccination campaign in the United States: 200 million vaccinations are to be administered in the first 100 days of his term in office. That is an ambitious but achievable goal, said Biden on Thursday at its first formal press conference at the White House. “I think we can do it.”

Biden had promised before taking office on January 20 that at least 100 million vaccinations should be administered in his first 100 days as president. The goal was achieved at the end of last week, after almost 60 days in office. No other country in the world has given as many vaccinations as the US said Biden. His new goal should be achieved by around mid-April.

After a slow start, the vaccination campaign in the USA quickly picked up speed. According to the CDC health authority, 130 million vaccinations have been given since mid-December – 115 million of them during Biden’s tenure alone. Currently, between two and three million vaccine doses are administered daily: Biden’s goal of 200 million vaccinations by mid-April is therefore an ambitious one.

So far, according to the CDC, a good 85 million people in the US have received at least the first dose, and 46.3 million are already fully vaccinated. In the US, the vaccines from Moderna and Biontech / Pfizer are used, in which two doses are injected, and the vaccine from Johnson & Johnson, which is fully effective after just one dose. The vaccine from Biontech / Pfizer can be injected in the USA from the age of 16.

Biden’s government has promised to have enough vaccine for all of the roughly 260 million adults in the country by the end of May. A total of around 330 million people live in the USA.

Steinmeier is not allowed to sign the law on the EU...