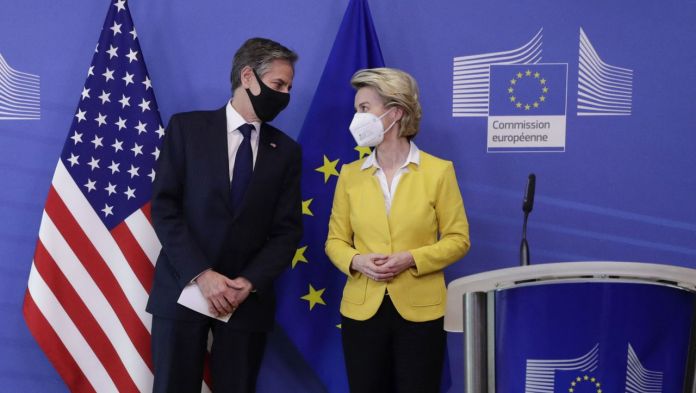 The new US Secretary of State Antony Blinken has promised the EU close cooperation. “We see the European Union as the partner of choice (…),” said the American on Wednesday on the sidelines of a meeting with Commission President Ursula von der Leyen in Brussels. It is up to the EU and the USA to come together and show the world that democracies can do more for people than autocracies, emphasized Blinken.
After a meeting with the EU foreign affairs representative Josep Borrell, they announced in the evening that they would continue the bilateral dialogue with China. The challenges and opportunities in dealing with China should be discussed, said Borrell. It was only on Monday that the EU imposed sanctions on four Chinese people for violating human rights. Beijing responded with countermeasures, imposing sanctions on ten Europeans and four institutions in the EU.

“Today we are opening a new chapter in our relationships”

They also want to address the “challenges of Russian behavior”, including the aggressive behavior towards Georgia and Ukraine, as well as its “interference in electoral processes”. They also want to work together on issues such as human rights, security and climate change. “Today we are opening a new chapter in our relationships.” Blinken said to the Spaniard: “I assume that we will be in very close contact in the coming weeks and months.”

During the tenure of the previous US President Donald Trump, the relationship between the US and the EU was extremely tense. New US tariffs and US going it alone in environmental and security policy had contributed to this. Joe Biden’s new US administration now wants to take a different course.

Quick test before Christmas: Free tests for the holidays?

Corona: France’s new path – with a critical reference to Germany

Update to version 1.5 with multiplayer co-op lands on Switch, PlayStation...

Focus on the winter season – Alpine countries argue about the...

Gabe Newell: Valve wants to develop its own games again

Corona – METRO: Up to 30 percent of Austro-Gastro no longer...