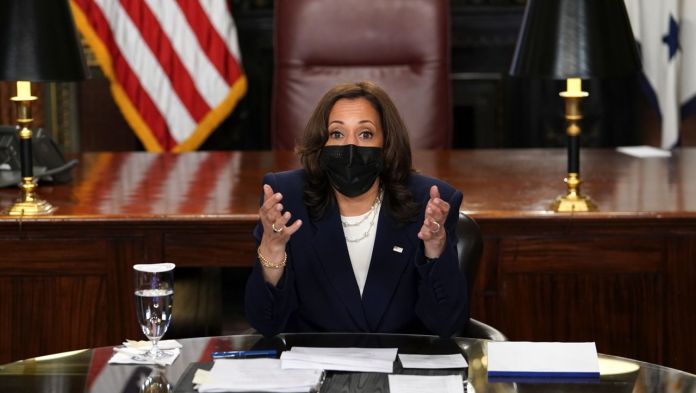 US President Joe Biden puts the control of Central American migration in the hands of Vice President Kamala Harris. She should lead the diplomatic efforts with the countries in the region and find ways to prevent people from making their way to the United States, Biden announced on Wednesday in the White House.
“I think I gave you a tough job,” Biden said to Harris. However, no one is better placed to work with Mexico and the countries of the Northern Triangle – Guatemala, Honduras and El Salvador – on this issue, Biden said, referring to Harris’ experience as attorney general in the largest US state, California.
For Harris, the new accountability is an opportunity to stand out as a Vice President in the midst of a heated issue. Biden held a similar position as Vice President under Barack Obama. The situation on the southern border was without question a “challenging situation,” said Harris. People are leaving the countries for different reasons and it is a matter of addressing the causes that are driving people to leave. The refugee movement could be triggered by poverty and crime in the refugees’ home countries.

Since Democrat Biden took office, the number of migrants from Central America has increased significantly. Homeland Security Minister Alejandro Mayorkas, himself a Latino, warned people several times against trying to get into the USA: “The border is closed,” he said in several TV interviews. “Don’t come”.

Biden had relaxed the strict immigration policy of his predecessor Donald Trump. While adults and families apprehended at the border continue to be sent back to Mexico, unaccompanied minors are allowed to enter the United States. The opposition Republicans accuse Biden of being responsible for the increased migration movement.

Pinturault wins on the Gran Risa

Christian Ilzer about the game: “An incredible end”

The expert expects a drug against Covid-19 soon

Departures canceled! Setback in the bullet fight for Odermatt and...

Fathers and children on the same wavelength when playing together