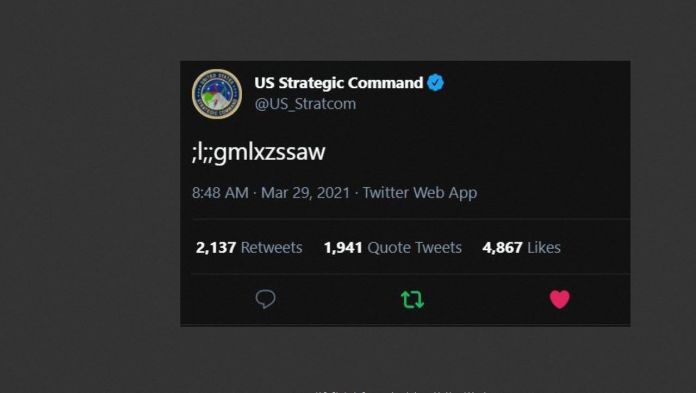 Of the Twitter account of the nuclear authority “US Strategic Command” (USSTRATCOM) published the tweet “; l ;; gmlxzssaw” on Sunday and confused users with it. The US agency is responsible for securing American nuclear weapons. In the meantime, users jokingly feared that the agency had been hacked and that the sequence of letters was the code for launching nuclear weapons.
It quickly turns out, however, that the tweet was just an accident: The news site “Daily Dot” made a formal request to the authorities and learned that the tweet had been written by a “very young child” of the social media manager. He had left his computer unattended for a short time.
Only a few minutes later, the tweet was deleted and the atomic authority apologized on Twitter and asked users to “ignore” the previous post. USSTRATCOM further stressed that the tweet was not the result of a hacking incident. “Absolutely nothing shameful happened, that means no hacking of our Twitter account,” it said in the answer. Previously, even followers of QAnon had used the tweet to support their conspiracy theory.
A user who saw the tweet already speculated that a cat had her fingers at work:

Nord Stream 2 sanctions? Dispute between the USA and Germany...

Jetsun Pema from Bhutan: So cute! Your “dragon baby” enjoys...

Gerwyn Price: The darts world champion with the rugby attitude –...

Mbabu with starting eleven – Wolfsburg wins thanks to Weghorst double...