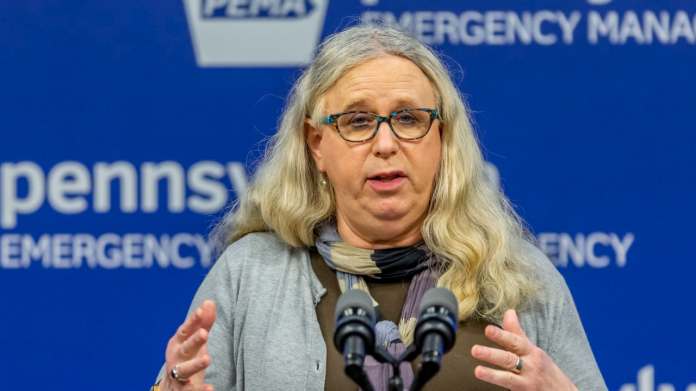 This has never happened before! US President Joe Biden (78) brings Dr. Rachel L. Levine, 63, is a transgender woman for the first time to a senior ministry post. Namely as Secretary of State in the US Department of Health.

The US Senate confirmed Levine in office on Wednesday. 52 senators voted for Levine, 48 against her.

“I am honored to be the first transgender person to hold a Senate-approved position,” said Levine. In her new office, she wants to stand up especially for trans young people. “I know that you face many difficult challenges every day. What I can tell you: There is a place for you in America and in our government. “

What distinguishes the doctor? And what was Rachel Levine’s story in life?

► She was born on October 28, 1957 in the east coast state of Massachusetts as Richard L. Levine, child of a Jewish family. The father is said to have been a doctor, the mother a lawyer, a sister.

Levine attended an all-boys school, learned Hebrew, and celebrated Bar Mitzvah (religious maturity) at the age of 13. In her teenage years: member of the football and hockey team. But what reads like the résumés of many young men never felt like that to Levine.

According to The Patriot-News, she once said, “All I knew was that I wanted to be a girl. Or I was already a girl or female. ”
But in the late 1960s and early 1970s, gender reassignment wasn’t an issue to talk about in a relaxed manner. So: keep going, be silent, focus on other things.

After graduating from high school in the Boston suburb of Belmont, his career took off. A degree from Harvard. One at the Tulane University School of Medicine. Fellowship and residency in pediatrics (pediatrics) at Mount Sinai Medical Center in New York City.

It is not known exactly where Levine met Martha Peaslee. But both are medical professionals, were obviously deeply in love – and said yes. Two children, Dayna and David. 1993 moved to Pennsylvania.

For more than two decades, Levine worked in a leading position at Penn State Hershey Medical Center near Harrisburg. There she founded the Department of Adolescent Medicine and the Clinic for Eating Disorders. But while Levine was able to help many young people, the identity problems for the family man himself became more and more dramatic.

One man, successful at work, married, two children. The appearance of a perfect life. Only what Levine really felt, no one suspected.

“I had a bad midlife crisis,” she says looking back. Levine was in therapy for years and also went to meetings for transgender people. Finally, the insight: “What matters is that I have decided to live my life without secrets … without fear.”

Life as a woman. As a lesbian woman. How Levine taught this to her family, friends and colleagues is not known.

But: From 2008, she let her hair grow long, a good three years later the gender reassignment and the official name change to Rachel L. Levine. Then in 2013 the divorce from his wife Martha, with whom she is still good friends.

According to media reports, Levine found a new partner afterwards. And at work, too, things continued to go very well. The doctor made political contacts, among other things, made sure that a certain drug (naloxone) was used against drug overdoses. In 2017, Levine became Secretary of Health in the US state of Pennsylvania. So now State Secretary under the new Health Minister Xavier Becerra (63).

Levine is a “historic and highly qualified choice,” said the new US President Joe Biden in January. She brings “the leadership and crucial expertise that we need to get the population through this pandemic”.

Florian Silbereisen photographed with IHR – rumor in the world!