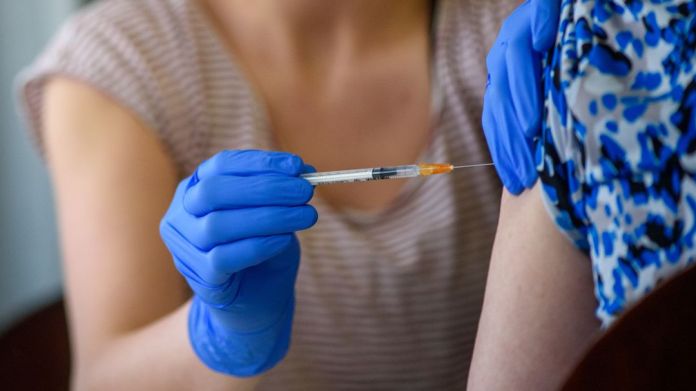 Berlin. The writer Mark Twain once stated that prognoses are difficult, especially when they concern the future. This is even more true in times of a pandemic. In the next few days, at the beginning of the second quarter, a new chapter in the fight against the pandemic is to be opened: In the next three months, a multiple of the vaccine doses previously delivered in Germany is expected. In addition, the doctor’s offices will start vaccinating regularly.

But on Tuesday there was bad news that upsets many plans again: Due to new cases of life-threatening cerebral vein thrombosis, the vaccine from the British-Swedish company Astrazeneca is now only to be used in people over the age of 60.

The authorities had given the all-clear just under two weeks ago: the vaccine had been released again after a vaccination ban. However, 31 cases of illness are now known to be related to the vaccination – nine people died. That is why the Standing Vaccination Commission (Stiko) now recommended this restriction – although vaccination should remain possible for younger people “at the discretion of the doctor and with individual risk acceptance after careful explanation” – means: If you really want to, you can continue to be vaccinated with the vaccine.

The new findings cannot be ignored, said Chancellor Angela Merkel (CDU) late in the evening after consultations with the country leaders. Health Minister Jens Spahn (CDU) spoke of a setback. But he tried to spread optimism: The new regulation could now vaccinate older people faster – especially since the Astrazeneca vaccine will be released for everyone over 60 with immediate effect.

When family doctor Ulrike Petri filled out her order for vaccines a few days ago, this development was not yet in sight: The doctor noted “30 Covid vaccine doses plus necessary vaccine accessories” on “Form 16” for the pharmacy, from which she usually also took the Needs for their practice. “It’s finally starting,” says the doctor, relieved, who looks after hundreds of patients in the Lehnin monastery in Brandenburg.

The fact that Astrazeneca is partially failing is not a problem, at least initially, for the expansion of the vaccination campaign to include practices, because initially only the Biontech / Pfizer vaccine is to be delivered to the doctors. Vaccination in practices, as the head of the statutory health insurance physicians, Andreas Gassen, put it, will become the “game changer” in the vaccination campaign, which has been sluggish up to now.

A question of trust

General practitioner Petri is also convinced of this. “I would have liked to vaccinate my patients from the start – even outside of office hours and on weekends,” she says. “I never understood why they set up extra vaccination centers.” She knows her patients.

There is the 80-year-old who is in a wheelchair after a stroke and would need a urinary catheter to survive the long drive to the vaccination center. Or the young man in a vegetative state who is difficult to transport and who is looked after by intensive care staff at home. “With the current vaccination rules, he falls through the cracks if I don’t vaccinate him at home,” says Petri.

“Doctor, I trust you, I want to be vaccinated, and that’s why I prefer to wait” – that’s what many of your patients would have said in the past few weeks. As soon as the vaccine doses are there, she first wants to take care of the very old and immobile patients whom she looks after during home visits. If there is anything left in the evening, she plans to vaccinate those who with a chronic illness only fall into the second vaccination category, but are mobile. “We can then call them and quickly ask them to go to the practice. Nothing has to be thrown away with us. “

Now she hopes “that I will soon have enough vaccine to vaccinate all of my patients.” That is also the hope of politics. While only around 16 million doses were delivered from January to March, according to the forecast of the Federal Ministry of Health, it should be up to 73.5 million doses in the second quarter – 40.2 million from Biontech / Pfizer, 6.4 million from Moderna, between 12 , 4 and 15.4 million from Astrazeneca and 10.1 million from Johnson & Johnson.

1.4 million doses from the German manufacturer Curevac are also planned for the second quarter, although approval of the mRNA vaccine is not yet in sight. The Russian vaccine Sputnik V, on the other hand, is not included in any of the delivery forecasts. It is too uncertain whether – and if so when – it will be approved by the EU Medicines Agency.

A scientist believes that there is a certain mechanism behind the possible thrombosis after an Astrazeneca vaccination. © TNN-Videoservice / dpa

Even under the unfavorable assumption that nobody wants to be vaccinated with the Astrazeneca vaccine anymore, Chancellor Angela Merkel (CDU) could keep her promise that every citizen will be offered a vaccination by the end of September – i.e. by the end of the third quarter. After all, a further 120 million doses are to be delivered between the beginning of July and the end of September, again mostly the vaccine from Biontech / Pfizer.

But how safe are the delivery schedules? “The figures are based on forecasts and are fraught with uncertainties. Changes are not unusual! ”Warns the Ministry of Health in red on all tables. The failure of a factory or supply bottlenecks for raw materials can lead to delays.

However, the ministry points out that deliveries have stabilized over the past few weeks. And: “Ultimately, we in Europe also benefit from the enormous progress made in vaccination in the USA and Great Britain. The faster they are vaccinated there, the sooner their export restrictions fall. “

In any case, it is foreseeable that the vaccination centers in the federal states will no longer be able to inoculate the delivery quantity alone in the coming weeks. The more than 400 centers across Germany produce around 300,000 cans a day. According to the National Association of Statutory Health Insurance Physicians, on the other hand, around one million doses of vaccine can be injected daily in medical practices. It is assumed that the 50,000 general practitioners’ practices each manage around 100 vaccinations per week.

Nevertheless, the centers should continue to operate for several months and receive preferential deliveries. The countries that want to use the vaccination centers they have built with a lot of money have managed to get 2.25 million doses per week for the time being. As a result, practices will only receive around a million a week until well into April – just 20 doses per practice and thus only a fifth of the possible capacity. The practices should not become a “rest ramp”, complained the head of the German Association of General Practitioners, Ulrich Weigeldt.

The Brandenburg General Practitioner Association even indirectly called on its members to boycott the vaccination centers, in which many resident doctors volunteer to help, from now on. You can now only “vote with your feet”, it says in a letter to the members, which is available to the RND. After all, it is “our altruism and our good-naturedness that have kept this system alive so far”, argues the association and appeals to the doctors: “Remember that when you are asked to take over services in the vaccination center again.”

Doctors want to take off

Nobody says it openly, but in the opinion of the Länder, the fact that the prioritization can no longer be maintained speaks against vaccination by the doctors. Others see it relaxed. “Now there are so many doses that it doesn’t matter if a doctor doesn’t stick to the exact order,” says a health insurance manager. “As Germans, we have to relax here. Every vaccinated person is a profit, the main thing is that we finally get going.

Gassen, head of statutory health insurance physicians, also calls for a start. Almost all countries that would vaccinate faster than Germany would get the pandemic under control, he says. In Israel and Great Britain, the number of infections and deaths is falling: “While other countries are vaccinating where and how they can, Germany is constantly working on new regulations and other bureaucratic requirements – instead of simply letting the practices do the job.”

Family doctor Petri knows what Gassen is talking about. Because a spade is not enough. The bureaucratic effort is extreme, she criticizes. The information sheet alone was five pages long and had to be signed several times. And the report about the vaccinations had to be delivered daily, “by 11:59 p.m. at the latest – as the instructions warn,” she reports.

Nonetheless, the doctor is optimistic that vaccination will finally make rapid progress. “That will work out,” she says, “despite the problems with delivery quantities and the bureaucracy.”

Janet Yellen crowns her career with the US Treasury Department

Siltronic expects sales and profits to rise in 2021 – Siltronic...