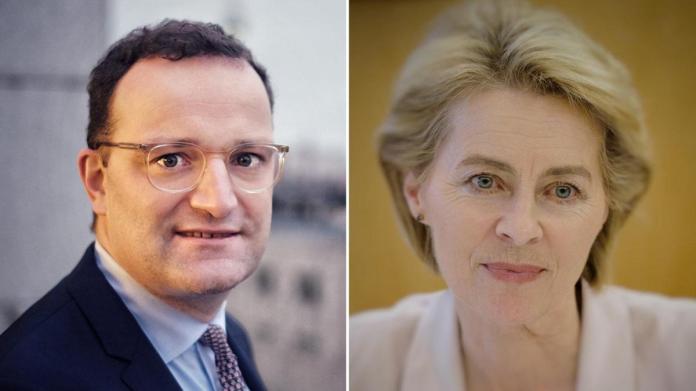 Health Minister Spahn and EU Commission President von der Leyen in particular are held responsible for the sluggish vaccinations. That is the result of an exclusive survey for WELT AM SONNTAG. Chancellor Merkel is assigned less political guilt.

IIn the public eye, the main political responsibility for the shortage of corona vaccines lies with Health Minister Jens Spahn and EU Commission chief Ursula von der Leyen (both CDU). That is the result of a representative survey by Infratest Dimap on behalf of WELT AM SONNTAG. 29 percent of those questioned attributed the misery to the German head of department. 26 percent consider the failures of von der Leyens to be the main reason why not enough vaccine has been available so far.

Alternatively, questions were asked about the Chancellor’s responsibility for the vaccination misery. Angela Merkel only blames 14 percent of Germans politically. 15 percent answered “none of the three”. In the past week, pollsters spoke to 1,298 people in support of the investigation, 16 percent made no specific comments.

When asked, the survey participants were also able to indicate what political consequences they expected from the German government members. Every second person who politically attributes the vaccination misery to Spahn is of the opinion that the Minister of Health should resign (51 percent). At Angela Merkel, an early exit from office of 49 percent is desired.

In Germany, 12.3 million vaccine doses have been administered since December 27th last year. Almost 8.6 million received an initial vaccination. This means that the quota of those vaccinated for the first time is just over ten percent of the population, 4.5 percent are fully vaccinated. This puts Germany – like almost all EU member states – far behind in an international comparison. In Israel, 60.3 percent of the population have been vaccinated at least once, in Great Britain 43.2 percent and in the USA just over a quarter.

Federal Minister of Health Jens Spahn (CDU) has announced that the vaccination campaign, which has started slowly, will pick up speed in the second quarter. Germany expects 15 million vaccine doses in April alone. That would be a larger amount than was inoculated in the entire first quarter.

In order to become more independent of imports and to avoid permanent bottlenecks, the federal government wants to significantly ramp up the production of vaccines in Germany. This is also supported by the trade unions. “The pandemic shows that although we are involved in research above, production capacities are now rare. We need a pharmaceutical pact to sustainably strengthen value chains in Europe, ”urges Michael Vassiliadis, chairman of the chemical union IG BCE, to WELT AM SONNTAG. “Bottlenecks, such as we have experienced with various medical products in the past twelve months, must not be repeated.”

However, representatives of the pharmaceutical industry warn against exaggerated expectations of manufacturers and of the federal government’s task force, which is supposed to promote the supply of domestic vaccines. In the short term, domestic plants could not remedy the current shortage of vaccines.

“Building completely new production facilities that can produce vaccine within weeks is utopian for technical reasons. Incidentally, that applies worldwide, ”said the president of the research-based pharmaceutical company (vfa), Han Steutel, of this newspaper. Existing systems are currently being converted or suitable systems are being upgraded. According to Steutel, this will at least “ensure additional, initially unplanned deliveries,” at least in Germany.

DHL with a big change: You should no longer frank small...

BVB: Loser of the Moukoko fairy tale – perspective shifts for...

Curfew in Oberhausen: Left accuse the city of mistakes

Alexis Pinturault – big and small crystal for his birthday

Germany weather: A lot of rain before Christmas