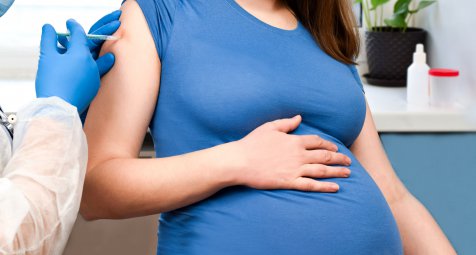 Boston – Vaccination against SARS-CoV-2 during pregnancy may not only protect pregnant women from COVID-19. An observational study in the American Journal of Obstetrics & Gynecology (2021; DOI: 10.1016 / j.ajog.2021.03.023) shows that the protective antibodies can also be detected in the umbilical cord and in breast milk.

Pregnant women are usually excluded from registration studies. It is currently unclear whether the vaccination is safe and effective for them. An interesting aspect is the possible protection of the child. This can be done before birth via the placenta, which is passable for IgG antibodies.

After the birth, mothers can protect their children by breastfeeding, as the intestinal mucosa in babies is still permeable to antibodies. This generally bridges a vulnerable phase in the first few months of life, when the infant’s immune defense is still weak.

In the absence of reliable evidence, a team led by Galit Alter’s immunologist at the Ragon Institute in Boston examined the immune responses of 131 women of childbearing age: 84 were pregnant and 31 were breastfeeding. The other 16 women formed the control group.

The women received the intended two doses of the approved mRNA vaccines from Biontech / Pfizer and Moderna. The pregnant women were vaccinated for the first time on average in the 23rd week of gestation: 11 women were still in the first trimester, 39 women in the second trimester and 34 women in the third trimester.

The antibody response was examined once at the 2nd dose and a 2nd time 2 to 6 weeks later. Antibodies were searched for in the umbilical cord blood at birth and in breast milk after birth. Not only was the antibody titer determined, but also the ability of the serum to prevent pseudoviruses from infecting cell cultures, which is a relatively complex function test of the antibodies.

According to age, the same high titers of IgG antibodies were found in the blood of the pregnant and breastfeeding women as in the control group of non-pregnant women. The titers of the IgA and IgM antibodies were somewhat lower, but this cannot impair the protection of the fetuses, since only the IgG antibodies can cross the placenta.

The IgG antibodies were found in the umbilical cord blood in a slightly reduced concentration. There, the ability of the antibodies to neutralize the viruses in laboratory tests was only slightly weakened. The differences were not significant, so that age assumes that the children are protected from infection with SARS-CoV-2 in the womb.

After birth, the antibodies in breast milk could protect them from disease, although the researchers did not investigate whether the antibodies also entered the infants’ blood via the intestines.

Overall, the US researchers assume that vaccination of pregnant women is safe and effective, as was also shown for the flu vaccination. The manufacturers are now having their vaccines tested specifically on pregnant women. Biontech / Pfizer started a clinical trial in February that will involve 4,000 pregnant women. © rme / aerzteblatt.de

Robert Geiss pissed off after a judicial error – TV millionaire...

If canceled, the Super-G could be added on Monday in Val...

Vertonghen: Played with “headaches and dizziness” at Tottenham for 9 months