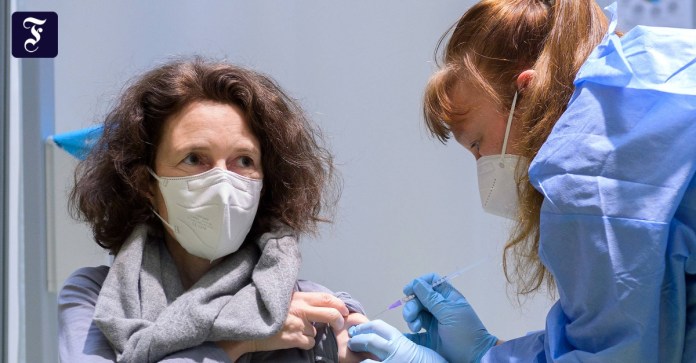 The Berlin doctor Natascha Kempkes vaccinates Beatrix Mengen in Terminal C of the former Tegel Airport in the corona vaccination center with the corona vaccine from Astra-Zeneca.
Image: dpa

The federal government has “great hope” in Curevac, says Christoph Krupp. If the approval by the European Medicines Agency EMA works on time, the new vaccine could be injected from around July.

Dhe vaccine commissioner of the federal government expects a second German corona vaccine from the third quarter. “The government has high hopes for the vaccine production by Curevac,” said Christoph Krupp to the newspapers of the Funke media group. If the European Medicines Agency (EMA) approves it as planned by the company, “then we can use the Curevac vaccine from the second half of the year”.

In February, Curevac handed over the first data packages to the European Medicines Agency (EMA) as part of a rolling approval process. The Tübingen-based biotechnology company has teamed up with GSK for the production of its corona vaccine, which has not yet been approved, but is also supported by the German chemical giant Bayer and the Swiss pharmaceutical company Novartis.

New data on the effectiveness of Astra-Zeneca

As a goal of the federal government, Krupp stated that such innovative vaccines in particular “will be produced in Germany to a significant extent” beyond 2021. Vaccine “made in Germany” should make an important contribution to supplying Germany, Europe and the world, said Krupp.

Meanwhile, a new study did the vaccine
from Astra-Zeneca certified 76 percent effectiveness against symptomatic Covid-19 diseases. AstraZeneca said, citing the analysis of current results from a broad US study, it would even completely prevent severe or critical processes.

Family lives in Germany for 30 years – then they are...

These Samsung deals at Saturn are worth it!

Lidl makes an important announcement and splits the network