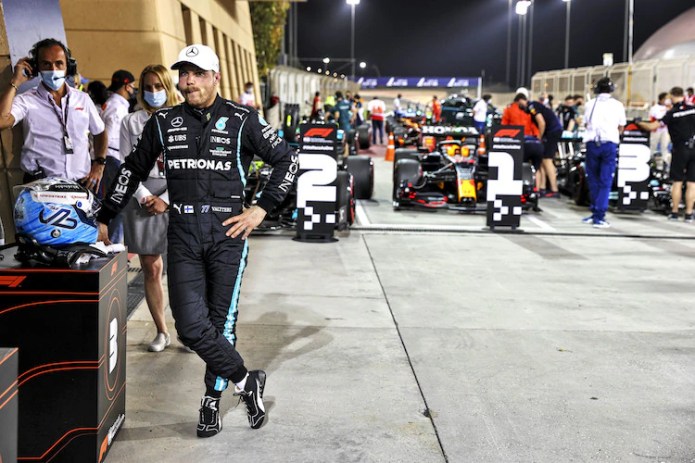 In the winter test, the assumption made the rounds: Mercedes wanted to hide how fast they can really drive. But GP winner Valtteri Bottas says in Bahrain: “We have never bluffed.”

Valtteri Bottas will start in the Bahrain Grand Prix from third place on the grid. The World Cup runner-up in 2019 and 2020 looks back on his training Saturday: “I couldn’t find a good balance in the third free practice session, so we made some changes for qualifying. The car felt better after that, but the lap time didn’t confirm that. So we rebuilt again and in the end I was only able to do one fast lap because of that. The feeling in the car is getting better and better, but it’s not yet ideal. “

“But you have to see the positive: We now have two cars in the top three, which creates some opportunities for the race. Of course we’re not happy that we’re behind, but now it’s also clear – we didn’t bluff in the winter test. “

“It was clear to us that we were not the fastest at the moment and that we had a lot of work ahead of us. But the mood is good, because we also notice that we are making progress with the new car. ”

Mercedes team boss Toto Wolff has confirmed: Mercedes is more affected than Red Bull Racing by the rule changes made by the FIA. Because the RBR racer is set up steeply from the front to the rear axle, which apparently makes the loss of downforce due to the changed regulations easier to digest.

Valtteri Bottas remains diplomatic: “I’m really a real aerodynamics fan, but I couldn’t say exactly what influence that has. I don’t even know the vehicle philosophy at Red Bull Racing. So let’s put it this way – they did a darn good job that winter. We have to catch up. “

No hug: Florian Silbereisen with rejection to Helene Fischer

ANTENNE BAYERN publishes Bavarian version of “Dinner for One” | ...

Timberlake apologized to Spears and Jackson

Renaulution: Renault brings the R5 back US Congress wants to keep troops in Germany

Another strike at the German Amazon site in Bad Hersfeld