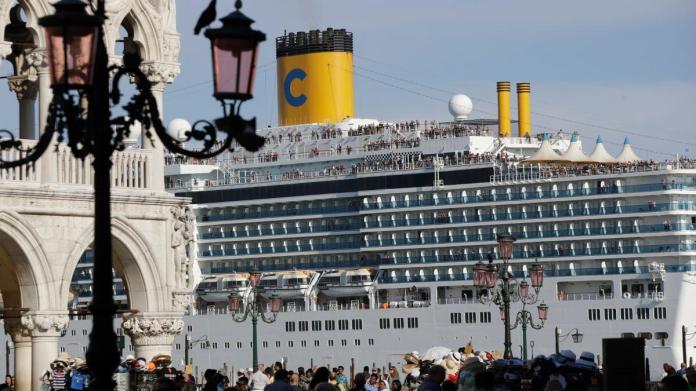 Venice no longer wants cruise ships to anchor as close to its historical sites as St. Mark’s Square.

In the future, the large ships should temporarily dock in an industrial port in the northern Italian lagoon city, as four ministries, including those for infrastructure and tourism, jointly announced on Thursday evening. In this way, a historical and cultural heritage should be protected not only in Italy but in the whole world.

In addition, the ministers had decided to start an ideas competition to structurally and definitively solve the problem of the passage of large ships in Venice, it said.

According to the Ansa news agency, a new cruise terminal is to be built.

For years it has been argued that the cruise ships are destroying the city’s environment and substance. The Unesco World Heritage City has only about 50,000 inhabitants. On the other hand, tourism rose continuously until the outbreak of the corona pandemic last year, millions of people came to the city on cruise ships, and according to the region, around 13 million overnight stays were registered in 2019.

“I just want to be a coach”

Corona: Retail does not expect shop closings to end quickly –...

Eintracht Frankfurt before the farewell to Abraham: The A question |...

Montenegro and Serbia show each other ambassadors