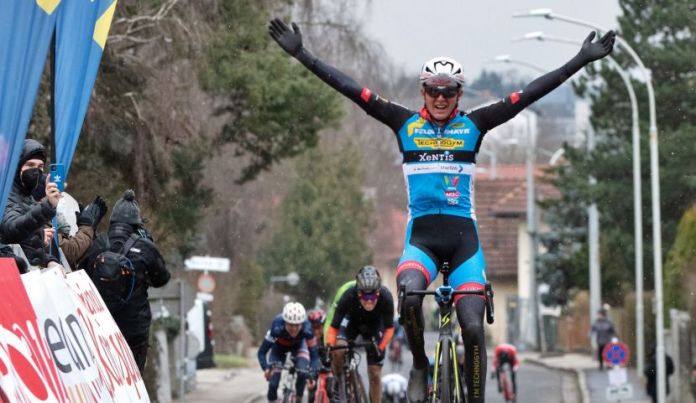 Leonding: Shortened season opener due to winter temperatures demanded everything from the professional cyclists.

Yesterday, the Austrian Cycling League season 2021 opened with the race in Leonding at temperatures of minus 2 degrees Celsius. The men’s elite race was shortened to 119.8 kilometers (instead of the original 153.2 kilometers) due to the weather conditions. If the track was still dry at the start, it started to snow halfway through the race, which made the race even more difficult.

An exciting race developed right from the start. On the selective route, the decision was made on the last kilometer, when Moran Vermeulen (Team Felbermayr Simplon Wels) was able to break away from his fellow competitors. The 23-year-old Styrian won with a 2 second lead over Pirmin Benz (Rad-Net Rose Team) and Jonas Rapp (Hrinkow Advarics Cycleangteam) from Steyr. Verena Eberhardt (Team RSC Arbö Burgenland) won the women’s race, while Belgian Cian Uijtdebroeks (Team Auto Eder Bayern) was successful in the junior race. “I gave everything in the last attack. Winning the season opener is an indescribable feeling, ”said winner Moran Vermeulen, delighted about his first major success as a professional cyclist. All results at www.computerauswertung.at

Right from the start there was a full attack
The Austrian cycling season 2021 started today with its own Corona concept. For a total of 94 professional cyclists in the men’s elite race, the start of the cycling Bundesliga, which was characterized by the cold and sleet, was a real challenge. Right from the start there was a full attack, in the first third of the race 11 drivers were able to break away from the peloton and gain a lead of 1:30 minutes. Little by little, drivers from the top group had to be torn down, and the Aichberg mountain classification once again proved to be the key point. The main field tried everything to put the leading group, but thanks to the optimal cooperation of the leaders, they were able to save a narrow lead across the finish line

Decision on the last kilometer
With Moran Vermeulen, Jonas Rapp and Florian Lipowitz (Tirol KTM Cycling Team) three riders started the final kilometers. Just before the finish, Moran Vermeulen attacked, ultimately took a decisive lead and celebrated his first major success as a professional cyclist. The winning time was 2:56:11 hours. Pirmin Benz moved up to 2nd place with a last run two seconds behind, at the same time ahead of Jonas Rapp, the Czech Karel Camrda (Team Topforex ATT Investments Pro C) and Florian Lipowitz. Defending champion Daniel Auer was unfortunately unable to start today due to an illness. The Felbermayr Simplon Wels team was able to win six times out of the last seven races in Leonding.

Verena Eberhardt successful in the women’s race
Leonding also marked the start of the new women’s cycling league. A total of 40 riders tackled the 64.8 kilometer route. Victory in the finish sprint after 1:52:34 hours was surprisingly secured by Verena Eberhardt (Team RSC Arbö Burgenland) at the same time ahead of favorite Jarmila Machacova (Team Dukla Prague), the Czech state champion on the road and world champion in the 2012 points race, had to be beaten by a narrow margin give. Third place went to Gabriela Erharter from the Union Raiffeisen Radteam Tirol.

Belgian victory in the junior race over 86.4 kilometers
In the junior race over 86.4 kilometers, Cian Uijtdebroeks (Team Auto Eder Bayern) could not be beaten. The Belgian won after 2:04:47 hours with a 25-second lead over his team-mate Luis-Joe Lührs. “Despite the wintry conditions, we saw an extremely exciting race. Over 40 marshals, in cooperation with the executive, ensured that the event ran smoothly, which was excellently organized in cooperation with the city of Leonding, ”emphasizes Paul Resch, President of Upper Austria. Cycling association.

But not a free test: Lockdown extended to January 24th –...

Population in Germany: Less immigration – population has stopped growing for...

Rolf Zuckowski: “Christmas baking” was “an expression of helplessness”

Live: Here Joe Biden is vaccinated against the coronavirus