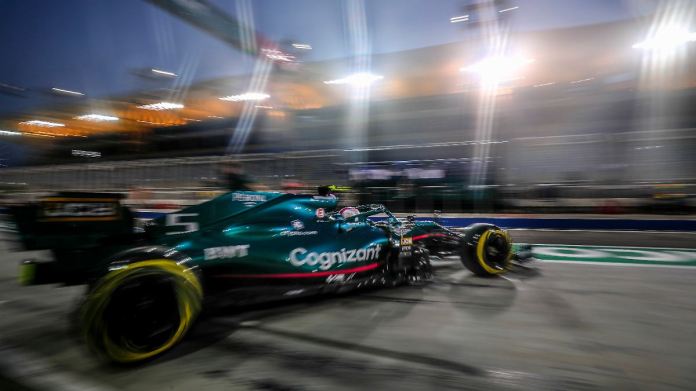 The qualification for the season opener of Formula 1 ends for the two German drivers after the first section. While Mick Schumacher can still be satisfied, Sebastian Vettel is disappointed. At the front, Max Verstappen surprisingly towers over the two Mercedes drivers.
The test drives had shown that Sebastian Vettel would not get used to the Aston Martin from now on and the free practice sessions at the Formula 1 season opener confirmed. Starting position 18, however, is a bitter disappointment for the four-time world champion, who wanted to improve after his forced departure from Ferrari, but is now as far behind as seldom in his impressive career.

That was not just because the 33-year-old was in Bahrain before the first race of the 2021 season (Sunday, 5 p.m. in the live ticker at ntv.de) is still fighting with his new company car. But also simply because Vettel had to take off the gas twice on his last fast lap, while numerous other drivers improved. Nikita Mazepin braked and spun in the Haas before corner one, Vettel had to obey the yellow flag in his green car and reduce the pace: “I think we might have had to be more careful and position ourselves better, but in retrospect it is you are getting smarter, of course that hit us hard today. ”

Mick Schumacher also failed in the first qualifying section, but as expected. The Haas simply won’t give away more this season, the 21-year-old will start from 19th place. However, the reigning Formula 2 champion managed to outperform his team-mate Mazepin with a margin of 0.824 seconds. “Very briefly, but still really happy in the end,” said Schumacher in the Sakhir desert: “We knew that there wasn’t much going forward, but we were still close.”

Mercedes dominance seems to be over

Pole position was then secured by Max Verstappen in the Red Bull, who had previously set the fastest time in all three training sessions. Although Mercedes took second and third place, the deficits of world champion Lewis Hamilton (+0.388 seconds) and Valtteri Bottas (+0.589) should confirm the German team’s concerns: The dominance of the past few years is over for the time being.

In fourth place was Charles Leclerc (+0.681), who clearly won the first duel with his new team-mate Carlos Sainz (eighth, +1.218). Pierre Gasly (+0.812) came fifth in the Alpha Tauri, and the Red Bull junior team made a remarkable impression. The McLaren duo with Daniel Ricciardo (+0.930) and Lando Norris (+0.977) will start the race from places six and seven.

50-square-meter shed burned down on the site of a rowing club...

Archdiocese of Salzburg: “A ray of hope of a special kind”

Apple and Hyundai are negotiating cooperation for electric cars

King Kong and Trump – how clairvoyants embarrassed themselves in 2020