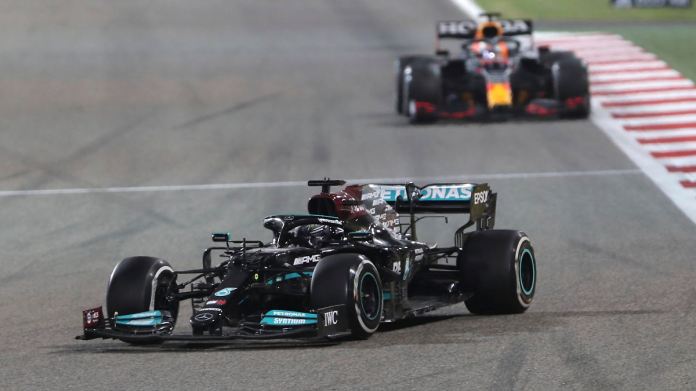 For Sebastian Vettel, the first race of the new Formula 1 season is sobering, in the Aston Martin there is almost nothing going forward. Mick Schumacher follows behind as expected, but much better than his teammate. World champion Lewis Hamilton wins because rival Max Verstappen lets him by.
Sebastian Vettel’s Formula 1 nightmare continues on the night of Bahrain, Lewis Hamilton beats Max Verstappen in a breathless duel – and Mick Schumacher drives a lonely first Grand Prix at the end of the field: with a wild race under floodlights, the premier class is in theirs started the new season and has already answered important questions.

The hero of the day in the desert was world champion Hamilton, who impressively fended off the attack of his rebellious challenger. The Mercedes star won the race ahead of Verstappen and his teammate Valtteri Bottas. He benefited from a not quite rule-compliant overtaking maneuver by Verstappen. He was actually already past the serial winner, but had left the track too far during the overtaking maneuver and therefore let Hamilton pass again. The Briton confidently fended off his further attacks. “We had instructions from the race management,” radioed Red Bull team boss Christian Horner to the audibly frustrated Verstappen after crossing the finish line.

“Wow, what a difficult race was that? Max was on my neck. I just managed to keep him at a distance,” said Hamilton, who celebrated his 96th career win. Verstappen only quarreled briefly: “It’s a very, very unfortunate thing, but we have to see the positive.

Vettel, on the other hand, disappointed across the board in the eagerly awaited debut for Aston Martin. After a very poor performance, the Hesse landed 15th far from the points and brought back the worst memories of the bitter last months at Ferrari.

Schumacher, meanwhile, gained important experience over 56 laps in the visibly inferior Haas racing car and was almost always stable. After his promotion to the premier class, the Formula 2 champion made exactly one mistake over the entire weekend – but the spin in the initial phase threw him back a long way. In the end there was 16th and last place, much more would not have been possible in the Haas otherwise.

Right at the front, the result was a hint for the rest of the season. The test drives two weeks earlier had indicated a change at the top, but this impression was reinforced in qualifying on Saturday: Red Bull, actually known for weak season starts and strong final sprints, was there right away, Verstappen took the first opening pole of the racing team since 2013. “I think”, said the Dutchman, “as a team we have never started a season so well prepared.”

The opposite was probably thought at Mercedes. Second place on the grid for Hamilton, but the gap to Verstappen was huge. After the start, however, Mercedes was up to par, and everything in the front remained as it was. A lot happened far back in the field. Vettel was slowed down in qualifying by a yellow phase on his fast lap and retired early, a penalty even allowed him to slide to the end of the grid. For the race he was planning to catch up: “I want to come forward and enjoy the whole thing a little.”

But that only succeeded in the first lap, Vettel made up six places. It should go on in a sobering way. As a result, Vettel got stuck and couldn’t keep up with the lap times of his much better placed team-mate Lance Stroll (at the end of tenth place).

At first, however, it became clear how difficult the task for Schumacher will be this year. Much had been said about how weak and difficult to control the Haas car is – the first race proved it. At first, team-mate Nikita Mazepin lost control of the car, but Schumacher himself was hit a little later. Unlike the Russian, however, he was able to continue – and at least achieved many kilometers in his first Grand Prix.

Vettel waited a long time for his first pit stop and was the slowest driver in the field for several laps, significantly slower than Schumacher. After the tire change things didn’t go much better, a collision with Esteban Ocon in the Alpine threw him back further and he even received a ten-second penalty for this. However, it did not change anything in terms of the result or the conclusion of the weekend.

What was not shown in “Who Wants to Be a Millionaire?”...

First products as early as 2022? According to the analyst,...