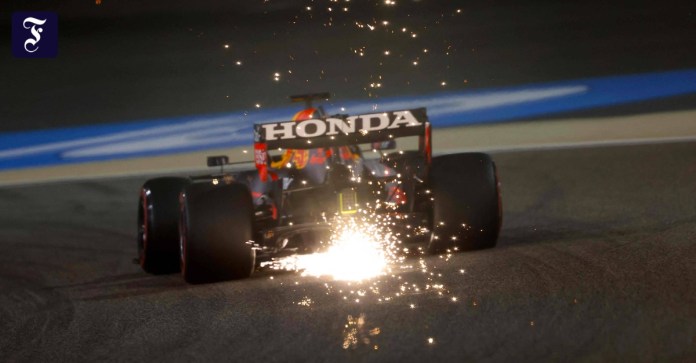 Iis this the turning point, the beginning of the end of an era? On Saturday it looked like this at first. Max Verstappen started the new Formula 1 season with a small triumph. The Dutchman left the seven-time world champion Lewis Hamilton in the series-winning car in the Red Bull by 0.4 seconds as the fastest in qualifying for the Bahraini Grand Prix on Sunday (5 p.m. CEST / in the FAZ live ticker for Formula 1 and Sky Sport F1) the past seven years behind.

“I gave everything and squeezed the car,” said Hamilton, “but Max is so quick at Red Bull. Unfortunately too fast for us today. ”0.4 seconds, that’s not a breath, but an announcement in the tightly packed performance society Formula 1. At least a confirmation that releases strength after a nerve-wracking first part of the weekend. And so Verstappen jumped from one camera team to the other, back and forth in the strictly sealed off interview zone in the paddock, in order to describe the first impression that was so important for the approach to his big goal: “Oh yes, that has made great pleasure. The car ran very well again. Now I still need a good start. ”If that wasn’t it.

Verstappen, only 23 years old, but the experienced leader of the youth group with 119 Formula 1 races and ten victories, wants to take over Hamilton’s legacy during his reign. Before the first race was over, the driver and his team boss Christian Horner tried to brake: “I think,” said Red Bull’s team boss, “we can challenge Mercedes over 23 races.” His colleague at Mercedes, Toto Wolff, approached from a different perspective: “If we can take part in the race, then we have a good basis for the next races.” Loosely translated: The world championship team sees itself as overtaken for the time being, but by no means left behind. Prepare yourself for an exciting fight for the title, Formula 1 fans.

Sebastian Vettel will not take part. That is almost certain according to the hour of truth on Saturday. The four-time world champion only finished 18th in his new Aston Martin, while his team-mate Lance Stroll finished tenth. As the? His acclimatization difficulties could not be overlooked during the short test drives and also during training on Friday. But so far back?

The story of the first defeat is easy to tell: On his last lap, Vettel had to take off the gas twice under yellow flags because Carlos Sainz’s Ferrari was in the way on strike and Nikita Masepin was spinning in front of his nose. The debutant from Team Hass had also handicapped his team-mate Mick Schumacher with the same mishap. The son of the record world champion finished his first race in Formula 1 in front of the Russian in 19th place, directly behind Vettel.

“I’m satisfied,” said Schumacher, while his compatriot looked gloomy over his mask: “We should have been more careful, even if it’s easy to say in retrospect.” What was meant was the strategy. It is always a risk to move out just before time runs out. The reward can be great. The route “faster” from lap to lap through the growing rubber tire. Vettel was annoyed: “The car felt better than in training. But that way we’re far from the points. ”The Aston Martin is fast enough to jump into the last round of the top ten. But Ferrari (Charles Leclerc / 4.) Passed Aston Martin, in 2020 under the name Racing Point with a victory the little king, for the time being. Alpha Tauri (Pierre Gasly / 5.) Managed the biggest jump, almost in the chasing group of the top teams, to which McLaren also belongs. In the tightly packed midfield, Vettel’s racing team will have to fight for points with Renault (Fernando Alonso / 9th).

Red Bull’s first pole position in Bahrain since 2013 had become apparent during the test drives. During training on Friday and Saturday noon before the hunt for the best starting position, Verstappen was over a lap faster than anyone else in the field. The strength of the car and driver could not only be seen in the lap times. The Red Bull ran like clockwork under all conditions on all sections of the Bahraini circuit. Whether with less wind and high asphalt temperatures (47 degrees Celsius) in the midday heat or with strong gusts on the strongly cooled route (32) after dark, whether in the fast bends or with a rapid train over the curbs. “It will be a tough fight over the entire season,” announced Wolff of the world champion’s resistance. He is in a better position as far as the strategy variants in the Grand Prix are concerned. Hamilton’s team-mate Valtteri Bottas is third on the second row of the grid on Saturday, while the new Red Bull driver Sergio Perez rushes off from eleventh place. No backing and a danger in the neck: Hamilton’s good endurance simulation on Friday will be a warning to Verstappen.

Was “grumpy Bernie” already on your doorstep?

Olli Dittrich in “House of Trumps”