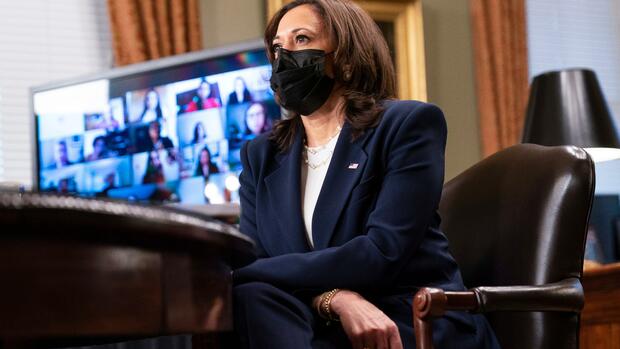 Washington It is only a few seconds that Kamala Harris is on a tarmac in front of her Air Force Two aircraft. But the video goes up and down on the Internet. “Kamala Harris laughs hysterically at the refugee crisis,” is the name of a clip that has been shared ten thousand times on Facebook. Tabloids and Fox News have been reporting on it for days.

In the scene, a reporter asks if the Vice President wants to travel to the Mexican border. “Not today,” Harris replies, then laughs. Anyone watching the entire eight-minute interview quickly understands that Harris was referring to her busy schedule. Even so, several Republican senators accused Harris of mocking the tense situation at the border.

In the immigration controversy, America’s right-wingers see an open flank of the US Democrats. Most recently, the authorities picked up more underage refugees from Central America than they have in 20 years. Pictures of overcrowded detention centers put the government under pressure: At Joe Biden’s first press conference on Thursday, there was not a single question about the pandemic, but many questions about illegal immigration.

The attacks on Harris show that the Vice President is at the center of the debate – and thus the focus of the political struggle for interpretation in the USA. “You can’t overestimate Kamala Harris’ importance,” emphasizes the democratic strategist Maria Cardona. In the coming weeks, attention will continue to grow: Harris is negotiating a possible refugee agreement with Mexico, El Salvador, Honduras and Guatemala. The White House promises a “strategic partnership”.

With the refugee crisis, Harris plowed for the first time a topic that is only associated with it. This is extremely important for your profile. When Biden was Vice President, then-President Barack Obama entrusted him directly with the financial crisis. George W. Bush’s Vice President Dick Cheney went down in history as the architect of the Iraq war, albeit as an inglorious chapter. Trump’s Vice Mike Pence was supposed to secure the backing for the Republicans in the religious right and coordinated the fight against Covid.

At Harris, citizens and the media, fans and critics will look particularly carefully at how she fulfills her new responsibilities. Because with the Democrats, she is the natural successor of 78-year-old Biden. The US president has announced that he will run for re-election in 2024. But in the election campaign, he had not ruled out simply wanting to serve one term. Then Harris would have the best chance of winning the top Democratic nomination. And should Biden leave office prematurely for other reasons, Harris will automatically take his place.

Harris decides on billions of packages

Harris is also under constant observation because her person is charged with symbolism and the expectations of her are gigantic. After all, the 56-year-old is not only the first woman, but also the first black woman and the first American woman with Indian roots in office. Harris broke through walls in many respects, “but certainly not the last,” she promised in her victory speech.

No one like Harris has ever sat in this post. “There is no blueprint for what Kamala Harris is supposed to cover, no operating instructions,” says the strategist Cardona. The Vice-President has “freedom to shape her role as she wants”.

That is the positive reading for the role Harris is supposed to perform. In practice, however, the pandemic and political circumstances mean that Harris can only slowly develop his own profile.

The Democrats see the Vice President as the natural successor to the 78-year-old.

Unlike her predecessors, Harris’ most important job is to keep domestic reforms from failing. This is due to the majority in the US Senate, which Harris is hogging. The chamber has 100 seats and is split fifty-fifty between Democrats and Republicans. As Vice President, Harris can step in with her vote as a “tie breaker” and secure a democratic majority for laws, judges and cabinet positions.

In March, she ensured that the Senate could open the debate on the $ 1.9 trillion stimulus package. It was the third time that Harris had to break a blockade. She could soon provide the decisive voice again if Biden wants to get a three billion dollar package for infrastructure and climate through Congress.

In public she took the situation with humor and brought chocolate for the senators. But reality has a bitter aftertaste, Harris is constrained by its responsibility. Usually the whole world is a stage for vice presidents jetting from one overseas visit to the next. Instead, Harris stood by for days of voting, in the first few weeks her radius ranged from the White House to the Capitol.

The broadcaster CBS wants to know that Harris will soon be more concerned with cybersecurity and future technologies. That would be an interesting focus, because during her career on the West Coast, Harris has been swarmed by Silicon Valley corporations. The topic would be ideal for making a name for yourself in foreign policy, which cannot hurt for a presidential candidacy.

The Vice President could “play a decisive role,” says expert Lindsay Gorman from the German Marshall Fund think tank when it comes to the US government’s goal of rolling back China’s technological hegemony. “We’ll see more international engagement from Harris soon.”

It will take time, however, for Harris to appear more prominently on the world stage. She is currently touring the USA under the motto “Here comes help” to advertise the approved trillion package and the vaccination program. You can tell that Harris uses her identity to initiate change. Harris chatted with an African-American saleswoman during a visit to a vegan taco shop in Nevada.

There is an above-average number of vaccine skeptics among blacks, which is partly due to the history of medical experiments in slavery. “Tell mothers, grandparents, uncles, brothers, sisters, cousins, just everyone that they need to be vaccinated,” warned Harris between two enchilada orders. “We are all in the same boat and can only save ourselves together.”

After a fatal assassination attempt on predominantly Asian women, Harris turned to the public with an incendiary speech. “Racism is real in America. Xenophobia is real. Sexism is real, ”she said. Harris is also one of the few prominent voices to put the focus on women in the pandemic. She calls the “mass exodus” of two million women from the labor market a “national emergency”.

Experts see Harris’ presence as a daily reminder of how America is changing. “Your rise holds up a mirror to the nation,” write researchers Kim Parker and Amanda Barroso of the Pew Research think tank. The Vice President combines “all demographic trends in one person”, such as the increasing number of multiethnic people and marriages as well as blended families.

Harris has a Jamaican father and an Indian mother, she is Baptist and has no biological children. Her husband and “Second Gentleman” Doug Emhoff is white, of Jewish faith and has two children from her first marriage. Harris also stands for the fact that more and more women occupy the positions of politics and business. This development can be seen not only among the Democrats, but also among the Republicans, where politicians like Nikki Haley are warming up for the election campaign.

On her visit to Florida, Harris was greeted by a girl who held up a poster: “Girls can change the world”. And the Vice-President has already ensured at least a cultural change. Her male predecessors smoked cigars in the upholstered furniture booths in the capital. Harris jogs up and down the steps of the Lincoln Memorial, accompanied by puffing security guards. Fashion bloggers in New York and San Francisco dedicate themselves to the one-of-a-kind pearls on their ears, and Harris’ advisors skillfully steer the attention.

During the election campaign, critics accused her of being cool and aloof, and now Vogue, Marie Claire and Oprah magazine are outdoing each other with photo series by Harris. Such a staging can be considered superficial, but in its case it is a statement. After all, black women in power are still a rarity in the United States.

“The African American, Hispanic, and Muslim communities in the country have suffered for four years. Now they see Kamala Harris in the White House every day. This is an unbelievable liberation ”, says the strategist Cardona.

Harris stood on the steps of the Capitol when she was inaugurated, just days before Trump supporters waved the Confederate flag. That alone was a symbol of a new start.

But in a polarized country, Harris is a target, much more so than Biden ever will be. The think tank Wilson Center found that the vice president is the politician who is by far the most talked about on the Internet. The attacks in the immigration debate are only likely to be the beginning.

In the coming year there is an election campaign, then the midterms will decide on the majorities in Congress. According to the political agency McClatchy, the Republicans are already working on strategies to target Harris.

More: Why the US government can only lose on immigration

For her 35th birthday: Lady Gaga’s phenomenal career in 35 pictures

Out of the shutdown – Boris Johnson wants to be on...

Coronavirus: Germany occupies a sad place in the death statistics

Joint invitations to “breakfast” by Kurz and Neumann – party donations

Frankfurt Airport: Lufthansa with special order – plane takes off with...