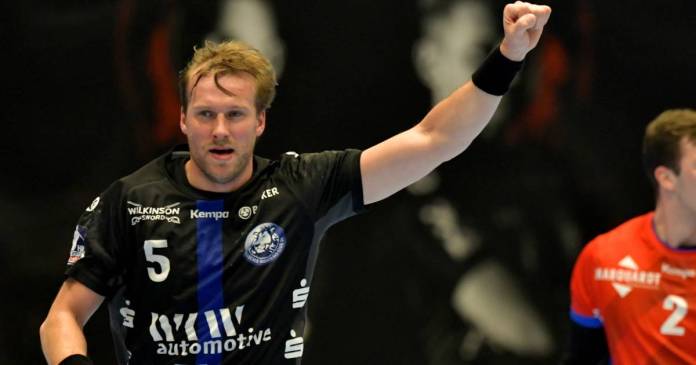 Wuppertal Max Darj has been wearing the jersey of the Bundesliga handball team Bergischer HC since July 2017. The Swede came from Aling-sas HK and helped bring the BHC back to the House of Lords. Since then, the 29-year-old has developed into an international class player. Before the home game on Saturday (March 6, 2021) against TSV Hannover-Burgdorf, the runner speaks about the season, his ambitions and the national team.

Rundschau: Mr. Darj, with a good month’s gap, what outweighs: the joy about the World Cup silver or the disappointment about the missed gold?

Darj: “” Even after this time I still hang in between. On the one hand, I am proud of what we have achieved, after all, we had to cope with a fresh start with a changed team and a new coach. We succeeded better than expected, but losing a final is of course very bitter in spite of everything. “

Rundschau: The team gained a lot of sympathy in your home country because they were unable to complete proper preparation due to corona cases. Do you think that the unexpected success will rekindle the handball euphoria in Sweden?

Darj: „The lack of preparation might not have been bad at all. So we were even more excited to play handball at the tournament. At the finale, there were record ratings on Swedish television. Yes, maybe there will be a small boom. “

Darj: “We have a good team and we have developed further especially since December. If everything really fits, then we can defeat any team. But we can still lose to any team. A target therefore makes no sense. I know it’s a boring answer – but we’re really just looking from game to game. We just want to win and try that next against Hannover. “

Rundschau: It was noticeable in the first half of the season that the BHC was always close against the top teams, but always came away empty-handed. Against Berlin two goals were missing, against Melsungen, the Rhein-Neckar-Löwen and Leipzig one each. Is something like that always just bad luck or is it also a question of a lack of quality somewhere?

Darj: “When something like this piles up, it can’t always be bad luck. Then you have to honestly say that we are still missing a little bit. What it is is hard to say. Maybe a little game intelligence, maybe a little bit of mental strength. It shows that we are unfortunately not yet perfect. But we are working on it.”

Rundschau: You should therefore look at every training session like a game and demand full commitment from everyone …

Darj: “It’s not as extreme as it is portrayed. But it’s true that I always put some pressure on in training. I want us to improve from week to week. Achieving this cannot be the task of the coach alone. I have to go ahead as an experienced player. But I’m not the only one doing it, others from the squad also help. “

Rundschau: You work both in defense and in attack. What’s the secret that you never get tired?

Darj: “There isn’t any. I live quite normally, without a private fitness trainer or a special nutrition plan. I just love to play handball. I am ready to give everything for that. “

Rundschau: Next week in the Olympic qualification against Germany. An international match like any other – or are you in a conflict?

Darj: “No, I’m really looking forward to it. It’s great because I’ve never competed against this big handball nation with Sweden. “

Rundschau: As runner-up world champion, you are the favorite in this qualification tournament …

Darj: „I do not think so. We may have been better at the World Cup, but as mentioned, we have a new team and Germany will also be able to fall back on almost all of its top performers again. In addition, the DHB team plays at home. No fans are allowed, but the players know the hall in Berlin. It will be a tough three-way battle for two Olympic tickets with the strong Slovenes. “

Rundschau: Will your last three months at BHC follow? They are said to be heavily courted by the Danish Champions League participant Aalborg HB …

Darj: “This is speculation, and I don’t want to comment on speculation.”

Rundschau: What is the most likely scenario? That you will leave the BHC this year, next year, or that you will renew your contract?

Darj: “I signed a contract with the BHC until June 2022, and that’s actually how it should be.”

The Finnish food delivery service Wolt is expanding into other cities

Sharon Stone has made grave allegations against Hollywood producers

Now Germany has to show what it can do

ARD and ZDF: Broadcasters move to the Federal Constitutional Court for...