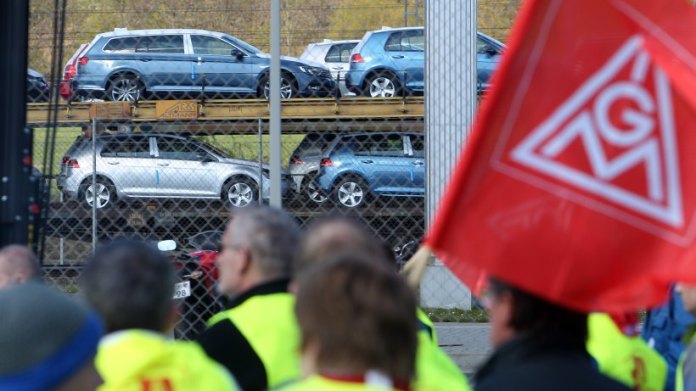 Hanover / Wolfsburg. That was probably nothing again! Also the fourth round in the in-house tariff poker between VW and IG Metall were again unsuccessful.

That’s why the metal workers have a new round of strikes on Wednesday VW announced!

Among other things, all three shifts are to be ended early in Salzgitter. Likewise, the shifts in Emden will be ended prematurely and a warning strike will take place at VW Hannover.

“For the second time, the fourth round of negotiations on the in-house tariff at Volkswagen has come to an end” – the union said nothing more on Tuesday afternoon. There was initially no reaction from VW.

According to reports, the fronts remain hardened: The negotiations for the more than 120,000 VW employees in the West German plants are stalling.

+++ For the first time VW announced a date – THEN the combustion engine should be history! +++

IG Metall had asked Volkswagen several times to make an offer. VW negotiator Arne Meiswinkel had stated that a “common basic understanding” of the economic situation had to be in place first. Last week he said: “We are ready to negotiate and want to reach a future-oriented deal.” >> VW wants to negotiate again – what’s in it for the employees?

The employee side is demanding four percent more money, an extended conversion into days off and new commitments for apprenticeships. “The fact that there are now talks is a good signal, but it does not mean that we have received a reasonable offer from the employer,” said Thorsten, the district manager of IG Metall in Lower Saxony and Saxony-Anhalt, before the fourth round Gröger.

Not only in the parallel wage dispute of the entire metal and electrical industry, but also at VW, there had been warning strikes in recent weeks.

According to the union, more than 65,000 employees at the car manufacturer and some of its subsidiaries took part. They usually ended their shifts a little earlier or started later.

Gröger said: “It will take a long time until we have a fair and solid result.”

The VW management had warned because of the Corona sales weakness and simultaneous investments in e-mobility and digitization to be careful with cost increases. (dpa / ck)

The expert expects a drug against Covid-19 soon