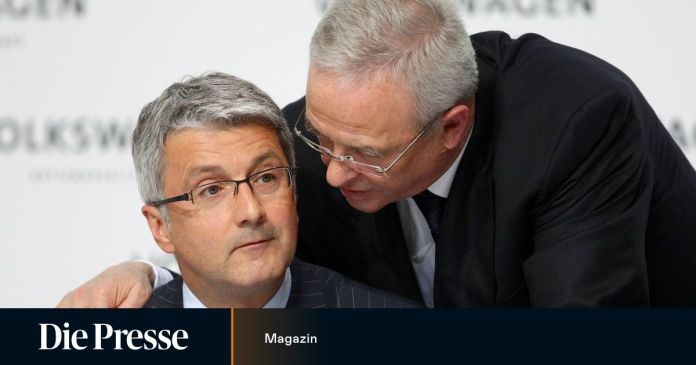 The VW supervisory board is now asserting claims for damages against former top managers. They are accused of having violated duties of care.

More than five years after the diesel scandal became known, Volkswagen is asserting claims for damages against the then CEO Martin Winterkorn and the former Audi boss Rupert Stadler. The supervisory board decided on Friday, as the group announced. Winterkorn had his lawyers explain on Friday that “they did everything necessary and did not neglect anything that would have led to the damage being avoided or reduced”.

Previously, after several years of investigations into the background and responsibilities of the millionfold exhaust gas manipulation, a law firm came to the conclusion that the managers had violated due diligence obligations under stock corporation law. After the investigations, it was clear to the Supervisory Board that the then Chairman of the Board of Management Winterkorn failed to immediately and comprehensively clarify the background to the use of illegal software functions in diesel engines that were sold in North America between 2009 and 2015 from July 27, 2015 . In addition, Winterkorn failed to ensure that the questions posed by the US authorities were promptly and truthfully and completely answered.

The former Audi boss Stadler had violated his duties by failing to ensure that the large diesel engines developed by the VW subsidiary were examined for impermissible software functions after September 21, 2016. Stadler has had to answer for the diesel scandal together with other former Audi and Porsche managers before the Munich Regional Court since autumn. Winterkorn before the Regional Court of Braunschweig from September 16, 2021.

Does insurance have to pay?

Both Winterkorn and Stadler have stated several times that they knew nothing about diesel fraud. Even now, lawyers commissioned by Winterkorn rejected the accusation that he had insufficiently performed his duties in connection with the exhaust gas manipulation.

Volkswagen had admitted the manipulation five and a half years ago under pressure from the US environmental authorities. The restitution has cost the group more than 32 billion euros so far. This could also be expensive for manager liability insurance (D&O insurance) taken out by VW. Such policies protect managers from access to their private assets if they have become liable for damages in the course of their professional activities. In order for the insurance to pay, the respective manager must be at fault, but he must not have acted deliberately (e.g. not knowing about the violation and not approving it). The insurance company also does not have to pay if the manager is not to blame for the disaster. The outcome of pending criminal proceedings is also a decisive factor.

In the case of large stock corporations in Germany, there is also a mandatory deductible that the manager concerned must pay out of his own pocket – unless he is privately insured against this risk. (ag./cka)[RBTQ7]

Between us: caretaker Krause star Michael Dierks gets in – TV

Katharina Liensberger: With a thrill in the ball final – winter...

“They are made for each other”: SAP competitor buys chat service...

What is your money worth?