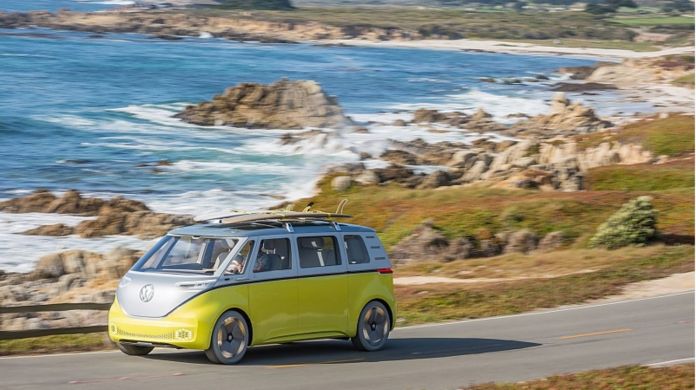 A bus in the Bulli look was often announced, the fans were always disappointed, but now the ID Buzz is really coming. The time will come at the end of next year.

VW has been showing studies in the look of the old Bulli for ages. They were never built. In the meantime, start-ups such as Canoo are announcing models that are suspiciously similar to the old VW legend, of course without the oversized logo on the bow. It will take more than 20 years, but now a Volkswagen bus with the designation ID Buzz is actually about to become a reality. The size of the bus is squeezed between the Sharan and the Transporter. Whereby the future of the Sharan is far from certain.

VW designer Klaus Zyciora himself can hardly believe that his lifestyle van is being built: “For me, a dream is coming true. Thanks to the ID platform, we can realize the proportions of the original Bullis.” As a reminder: the old Bulli had the engine in the back and not in the front, between the driver’s knees and the outside world there was only a few millimeters of sheet metal. You can’t build like that anymore, but no engine is placed in front of the passengers.

New car or used car: If you want to protect the environment when buying, you have to clarify three points

“With the T1 and the ID Buzz, the aim is to provide as much space as possible in as little traffic area as possible,” says Klaus Zyciora. Except that the ID Buzz is not as sparingly equipped as the old vans. There is no need to open the door. A swipe on the door, then the car opens and reveals the interior: seats with light-colored fabrics that can be moved on a rail system and – in the case of the front seats – can even be rotated. VW brings its Multivan experience to bear here. There is plenty of space, because the inside dimensions in the e-vehicle almost correspond to the outside sizes, there is more than enough space in the ID Buzz, which is built with two wheelbases, thanks to the length of around five meters and the wheelbase of three meters.

The cockpit is pleasantly tidy. The navigation and other information are shown in the head-up display. The new one is as handy as the old one. Thanks to the high seating position and the clear body, maneuvering is easy. The top version of the ID Buzz should produce 374 hp and, depending on the battery size (80 to 110 kWh), have a range of up to 600 kilometers. However, it is presumably limited to 160 km / h. The ID Buzz does not drive fully autonomously. When it comes on the market at the end of 2022, it should create driver assistance level three. The goal remains level four. As expected, there will be an e-transporter and a panel van in addition to the bus. The technical basis is the modular electrification kit, which was already used in the VW ID 3.

The crowd does it

Volkswagen is putting a lot of pressure on e-vehicles. VW wants to bring around 70 pure electric car models onto the market by 2030 and thus at least leave Tesla behind in the registration statistics. The ID Buzz has the greatest image potential. The inclusion of the iconographic Bulli look makes it unique and a popular figure.

Audi e-tron in the everyday test: It’s fun, but the charging station infrastructure is “the horror”

In addition, there is the position of VW’s commercial vehicle division in leisure buses. Nowhere else is the distance to the competition as great as here. And the concept of a spacious bus fits better into the coming electric future than that of a pure driving machine. The ID Buzz is being built in Hanover on the line of the VW Amarok pick-up that was discontinued there. By 2030, sales of pure electric vehicles in Europe at VW are expected to increase to over 70 percent, twice as many as currently, while in China and the USA it should be more than 50 percent.

Despite the sales ban in Berlin: The big bang tourism is...

BR24Live: Spahn declares himself to be corona vaccinations

A summer full of envy and resentment

Ministry: Next opening steps in all of Bavaria on hold