In Waldshut-Tiengen (D) a truck drove into the Rhine.

A red truck lies in the Rhine. The driver’s cab can just be seen. A BLICK reader will witness how the rescue workers are on site. “I wanted to get myself a kebab after work when I saw the truck lying in the water,” he says.

The accident happened in Waldshut-Tiengen (D), on the other side of the river from Koblenz AG. As the Freiburg police wrote, the lorry with an empty tipping body came off the road on the B34 between Tiengen and Waldshut around 2.30 p.m. and landed in the Rhine.

The 46-year-old chauffeur was able to save himself on the bank and was taken care of by the arriving rescue workers. The seriously injured man was hospitalized for further medical treatment.

The driver had turned left for a previously unknown cause. After the dump truck broke through the guardrail and damaged a lantern, it fell down the embankment to the Rhine and came to a standstill in the water.

A crane is used to recover the truck. The rescue measures are still in progress. «I saw two boats and several fire engines in the country. The rescuers had just lowered a ladder, ”reports the BLICK reader.

The resulting property damage is around 50,000 euros, the police wrote in the message. There is currently no evidence of environmental damage caused by the accident. (man)

This side of Eden ?: Nino de Angelo plans fifth marriage

Eviction of migrant camp in Paris: criticism of the police –...

Barcelona joins as the eighth location 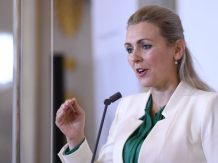 Plagiarism allegation against Aschbacher: Greens worry about the reputation of the...