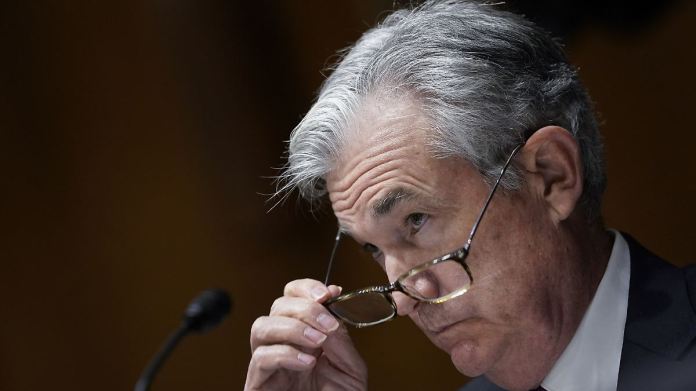 The stock exchanges put every sentence from Fed Chairman Powell on the gold scales: Just the hint that some stocks could be overvalued is enough for a turn into the red. The sharp tone between China and the US is also worrying investors on Wall Street.
Wall Street closed weaker after a highly acclaimed appearance by Fed chief Jerome Powell. Powell spoke before the House of Representatives Financial Services Committee. Wall Street prices added to their losses as Powell said some assets had risen in valuations. Nevertheless, there were no surprises. Despite the extensive fiscal package, Powell said he was not concerned about rising inflation: “We believe the impact on inflation will not be particularly large or permanent.” Also before the committee, Treasury Secretary Janet Yellen predicted full employment in the USA for the coming year.

In addition, the focus was on a negative foreign policy factor. The tightening of relations between China on the one hand and the USA, the EU and Canada on the other created uncertainty. The West has imposed sanctions on Beijing for dealing with the Uyghur Muslim minority. China has already responded with countermeasures.

“We are probably in a cyclical upswing, but we may have run ahead of ourselves,” warned Invesco’s fund manager Sebastian Mackay of the current risks. The discussion about a large infrastructure package from the Biden government is seen as positive for the stock markets. Investments in the ailing US infrastructure of up to $ 3 trillion are being considered here.

The yield on ten-year US government bonds is currently falling by almost 7 basis points to 1.63 percent. Bond experts fear, however, that the enormous demand for debt, especially with regard to the infrastructure program, could drive yields further upwards. Bank of America takes its forecast for the US ten-year return well above the 2 percent mark upwards. The President of the Federal Reserve Bank of Richmond, Thomas Barkin, does not want to be deterred by higher inflation figures in the next six months. His colleague Robert Kaplan from Dallas expects the Fed to raise the key rate next year.

Drew among the individual values Biolife Solutions after initially double-digit profits by 8.8 percent. The biopharmaceutical company swallows Stirling Ultracold. Financial details were not given. Biolife expects sales to more than double in 2021. Ionis Pharmaceuticals sagged by almost 22 percent. The Phase III trial of the drug Tominersen for Huntington’s disease, developed with Roche, has been discontinued.

Hartford Financial Services Group does not want to stand out from the competitor Chubb and rejects a corresponding offer. Hartford were unchanged, while Chubb was up 0.2 percent.

The titles of Quantumscape fell 10.6 percent. The battery manufacturer has announced a surprising capital increase. ViacomCBS fell by 9 percent, and the media group is also planning a capital increase. The papers of Apollo Global Management lost 0.6 percent. Leon Black, co-founder of the investment company, is stepping down as chairman of the board. Netflix went up 2.3 percent after Argus upgraded the stock to “Buy”.

Fresh snow in the Alps: masses of snow cause problems

First tourists on the island: “We only had Mallorca left”

Manchester City – Manchester United: Pep Guardiola is surprised in the...

Winter sports check before the Olympics: where Germany has worries and...