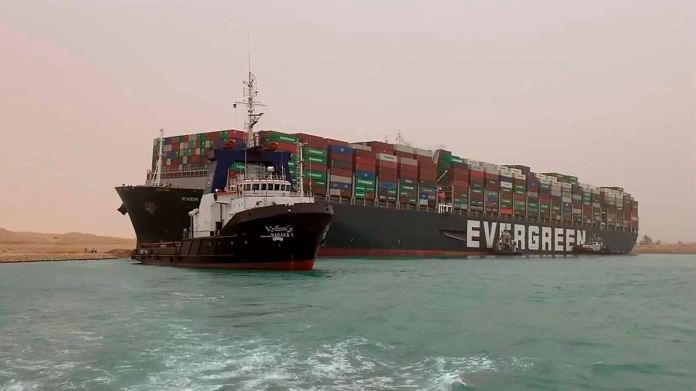 The crashed container ship in the Suez Canal gives the energy sector a high on the stock market with rising oil prices. However, technology stocks are coming under massive pressure and pushing the Nasdaq deep into the red.
Wall Street did not hold profits. Only the Dow Jones index showed little change, supported by industrial stocks, the oil sector and financial stocks. In contrast, the technology stocks showed a life of their own again, as they fell massively and pushed the Nasdaq indices deep into the red. They were sold because of the increased yields on the bond market, which are causing problems for the often indebted corporations. For most of the time, hopes that interest rates would remain low had fueled hopes. Because incoming orders for durable goods in February were weak. The purchasing managers’ indices for service and manufacturing in March also fell short of expectations.

Meanwhile, US Federal Reserve Chairman Jerome Powell tried to calm the mood because of the rising bond rates. Speaking to the Senate, he said the increase has come from a very low level, merely reflects confidence in a recovering economy, and is a “due process”. However, market players remain skeptical as to whether there might be a risk of interest rate increases in the medium term. The yield on ten-year US government bonds finally turned after minor spreads by 1.2 basis points to 1.62 percent in the red.

Thanks to rising oil prices, the energy sector grew by 2.5 percent. Exxon Mobil and Chevron each increased by over 2 percent. The “Industrials” were also at the top of the Dow Jones Index Caterpillar (+1.4 percent), 3M (+1.2 percent) and Honeywell (+1.8 percent). Intel fell 2.3 percent after initially gaining 5 percent. In view of a global chip shortage, the semiconductor company has presented plans to massively expand its chip production. However, skepticism soon prevailed in the market. Barclays said there was little new about product details and that financial targets were disappointing. The course of the great intra-American competitor AMD lost 2.4 percent. Steelcase reacted with a minus of 1 percent to the outlook from the manufacturer of office furniture. Adobe fell by 1.9 percent – despite good business figures and a raised annual forecast. At the same time, Adobe is looking for a new CFO because the previous one is withdrawing for private reasons.

Oil prices rose significantly. Participants referred to the problems in the Suez Canal, where a wrecked container ship is blocking the waterway. With the US inventory data, prices rose a little, although the Energy Information Administration reported a build-up in crude oil inventories, contrary to expectations. The price increase comes after prices have recently fallen sharply.

The share of, which has been extremely volatile since the beginning of the year in view of massive speculation, fell by 34 percent Gamestop. The retail chain for entertainment software has reported falling sales for the important Christmas quarter compared to the previous year. At the same time, sales and profits were weaker than analysts had expected. General Mills lost 4.2 percent after the food manufacturer failed to meet expectations with earnings per share in the third fiscal quarter. Even the announced share buyback failed to capture the disappointment.

In the restaurant chains of the Yum Brands group it is possible to order by text message in the future. For this purpose, the mother of chains such as Kentucky Fried Chicken, Taco Bell and Pizza Hut has taken over the Israeli platform Tictuk. Yum Brands fell 0.9 percent.

For years there has been trouble in Berlin-Reinickendorf: This lake is...