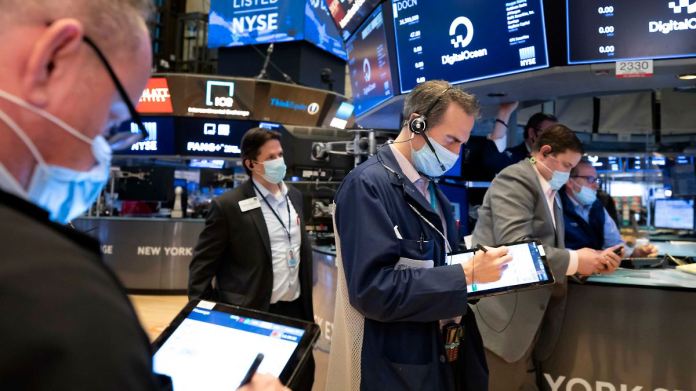 Positive economic data leads to a strong finale on Wall Street. The blockade on the Suez Canal continues to cause confusion in the market, but the Dow Jones rises significantly shortly before the end. In the end, even his record high is still within sight.
After a long period of rather sluggish business, Wall Street had an impressive finale. As price drivers, market observers identified positive news for the banking sector and the rapid corona vaccination campaign in the United States. Strong economic data drove the indices as well as purchases towards the end of the quarter. The fact that US President Joe Biden invited the presidents of China and Russia to a climate summit was also well received.

The stock market was temporarily slowed down by rising interest rates on the bond market. The yield on ten-year US Treasuries rose 4.4 basis points to 1.68 percent and thus marched back towards the high for the year. Investors are increasingly relying on the economic upturn again.

Recent data support this view. The index of the University of Michigan was better than expected, but it also signaled falling, but still high inflation expectations of 3.1 percent over the course of a year. And US consumer spending fell slightly in February. However, they are likely to rise again when the economic stimulus packages arrive.

The positive economic assessments put a strain on the bond market and the associated inflation worries also fueled returns.

Analysts remain positive on US stocks

The share price of Blink Charging increased by 1.7 percent. The provider of charging stations for electric cars posted a higher net loss than expected in the fourth quarter, but sales were above forecasts. Progress Software gained 5.9 percent. The software company reported a decline in profits for the first fiscal quarter despite increased sales, but the outlook for the year has been raised.

Vuzix plunged 13 percent after the tech company announced it would issue new shares. Science Applications International fell 16.6 percent. The information services provider posted higher net profits in the fourth quarter, but missed market expectations in terms of its outlook. The losers from the day before at the Dow Intel and Nike, recovered by 4.6 and 3.4 percent, respectively.

On the currency market, the dollar fell slightly after its recent rally – despite rising market rates. The upside potential of the greenback is likely to dwindle after it rose to a four-month high against a currency basket the day before, according to Unicredit. “Most of the factors behind the dollar’s renewed strength, from the strong growth fueled by the massive stimulus plan to the surge in long-term US yields, are well priced in and are unlikely to add any additional support to the dollar of the order of magnitude that has occurred so far, “said the bank.

In addition, contrary to the general expectation of rising inflation in the USA, the US Federal Reserve has announced that monetary devaluation will ease in February. At the core rate, the consumer spending index (PCE) rose 1.4 percent year-on-year. In January, this key figure for the Fed when calculating inflation was still 1.5 percent. The Fed’s medium-term inflation target is 2 percent. Consumer inflation expectations also fell slightly, but are still above the Fed’s target of 2 percent.

Crude oil prices remain highly volatile on a daily basis, but are currently clearly positive. After the previous day’s valley trip, prices are now recovering. The market is currently having a hard time drawing the right conclusions based on the headlines about the blockade of the Suez Canal and the economic data.

Playstation 5 received before Christmas – here is the console

With Keanu Reeves through dystopia

The jungle calls: Dr. Bob has arrived in Germany Free FFP2 masks will be sent out by mid-January