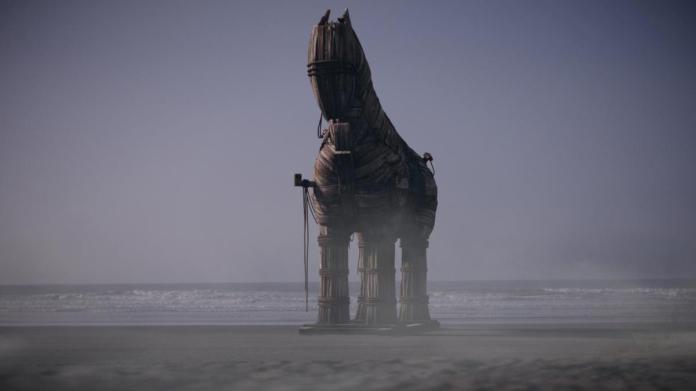 What was really in Homer’s Trojan Horse

In order to conquer Troy, the Greeks are said to have entered the city in the belly of a horse. Since then, every generation has been searching for the real essence of this myth. An underwater archaeologist now presents an amazing solution.

AIn the beginning there was the horse, at least in European literary history. Because in her earliest monuments, in the epics “Iliad” and “Odyssey”, a horse plays a leading role. With it, the Greeks succeed in conquering the mighty city of Troy after a ten-year war. The history of the Trojan horse’s impact has unfolded correspondingly tremendously (and speculatively).

The present is no exception, as the documentary “The Trojan Horse – On the Trail of a Myth” by Roland May in “Terra X” format by ZDF proves. Because neither the elaborate methods of archeology nor the source criticism of the historians could prevent every generation from looking for the “true core” of the famous story.

May does his job skillfully. On the one hand, it allows proven scientists to have their say, who present the current results of the scientific debate on the topic. On the other hand, it accompanies researchers on their fringes who do not want to come to terms with the prevailing opinion that the war over Troy was a myth: a reflection of their own culture and its central issues, as the Marburg classical philologist Boris Dunsch explains. For this, the poet mixed Homer around 700 BC. The archaeologist Winfried Held adds numerous elements from the reality of his life with memories of earlier epochs.

The Italian underwater archaeologist Francesco Tiboni wants to be satisfied with the interpretation as an “intentional story”. He joins the long list of those who want to attribute the “miracle horse” (Dunsch) an appearance in reality. To do this, he first follows the results of philology.

The fall of Troy, which has been located on the hill Hisarlik at the southeast entrance to the Dardanelles since Heinrich Schliemann’s discoveries from the 1870s, is generally believed to be around 1200 BC. Dated. It was then that the epochal crisis began, which completely changed the balance of power in the Levant. In addition to the Hittite Empire in Asia Minor, the Mycenaean civilization in Greece was also destroyed. Palaces and their central administrations fell into disrepair, and the survivors even forgot the script.

It was only 400 years later that the Greeks developed their new alphabet from the Phoenician alphabet, which was also used to record Homer’s epics. In the oldest copies of the “Odyssey” that came to us, the Trojan horse is referred to as “dourateos hippos”, which is usually translated as “wooden”, but specifically means the planks from which ship hulls were assembled.

From this, the Greek engineering professor Thomas Chondros from the University of Patras concluded that the horse consisted of the cannibalized wrecks of the Greek fleet. Based on the measurements that have come to us through sources and finds, the monster could have been five tons, nine meters high and eleven meters long, in which the elite of the Greek warriors hid while the rest of them appeared to be in theirs Ships rose. The Trojans were supposed to see the horse as a consecration gift to the goddess Athena and bring it to their city. There the heroes climbed out of the horse’s belly and overpowered the guards.

Tiboni is not satisfied with this explanation. Rather, he teamed up with the underwater archaeologist Tim Gambin, who is investigating a wreck off the coast of Malta. This is a Phoenician merchant ship that went down with its cargo around the time of Homer. These approximately 15-meter-long vehicles, which the Greeks encountered all over the Mediterranean, had a horse’s head as a distinctive identification mark on the bow.

This also fits in with the preferred mode of locomotion of the sea god Poseidon, who in the “Iliad” lets “fast-flying horses with hair with golden manes” pull his chariot. Later he is even presented as the “inventor” of the horse. From this evidence, Tiboni concludes that the horse that the Trojans pulled into their city was originally a ship that only in the imagination of incomprehensible listeners mutated into an animal centuries later.

A model for such a ship could have been the wreck of Uluburum, which was discovered by sponge divers off the southwest coast of Turkey in 1982. With him sank in the 14th century BC. A real treasure, 354 copper bars, 121 tin bars, blue glass, ivory, jewelry, tools and weapons. Later depictions of tribute payments to the Assyrian great kings show that Phoenicians settled the demands of the great power with such well-filled ships.

The TV documentary cleverly combines science and treasure hunts. For classical philology, the famous horse is an object of fantasy that became more and more concrete over the centuries, until the Roman Virgil about the birth of Christ finally concluded with his epic “Aeneid”. After ten years of war, the Greeks left a tribute ship for Tiboni on the beach in front of Troy.

Max Ullmann is Rapidler of the year 2020

The best smartphone of the past 3 years costs only 444...

Active ingredient can block the transmission of Covid-19

More protection against the coronavirus for the elderly: First vouchers for...