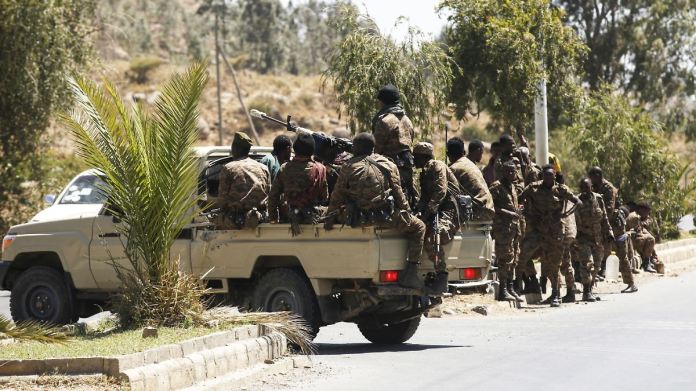 War in Northern Ethiopia
Eritrea withdraws troops after the massacre

Hundreds of civilians are killed by Eritrean militias in northern Ethiopia. Ethiopia’s President Abiy has long denied that troops from the neighboring country were involved in the conflict in Tigray. According to him, the soldiers are now withdrawing again. The full extent of the bloody war is still unclear.
In the Tigray conflict, Eritrea wants to withdraw its troops from Ethiopia, according to the Ethiopian government. Talks with Eritrea’s President Isaias Afewerki revealed that, Ethiopia’s Prime Minister Abiy Ahmed announced. Abiy had long denied that Eritrean troops were involved in the conflict with the Tigray People’s Liberation Front (TPLF) in northern Ethiopia. The ongoing conflict has already displaced hundreds of thousands of people and wreaked havoc.

The government in Addis Ababa had launched a military offensive against the TPLF in November, which had been in power in the region of the same name until then. The background to this were years of tensions between the TPLF and the central government. According to experts, the Eritrean troops were in Ethiopia at the invitation of Abiy to support the armed forces of his country. However, Abiy said the Eritrean troops had crossed the borders of neighboring Ethiopia after the TPLF fired rockets in the direction of Eritrea’s capital Asmara. Eritrea wanted to prevent further attacks and keep its security. Now Ethiopian troops are taking over the security of the border areas, he said.

The full extent of the conflict in Tigray is still unclear. Telephone and Internet connections were cut for months, and many residents had no electricity or water. Humanitarian workers estimate that a large part of the population in Tigray is dependent on aids. However, many organizations long complained that they did not have full access to all those in need. According to the UN emergency agency Ocha, more than 500,000 people are on the run within Ethiopia and more than 60,000 have fled to neighboring Sudan.

The Ethiopian Commission on Human Rights (EHRC) reported that Eritrean soldiers massacred more than a hundred civilians during the fighting in the northern Ethiopian conflict region of Tigray. On November 28 and 29, there were “serious human rights violations” in the city of Aksum in Tigray, announced the formally independent body affiliated with the government in Addis Ababa on Wednesday.

The massacre may be a “crime against humanity,” said EHRC. “It highlights the need for a comprehensive study of the human rights situation in the Tigray region as a whole.” The human rights organizations Amnesty International and Human Rights Watch had previously reported massacres of hundreds of civilians in Tigray. US Secretary of State Antony Blinken also denounced “ethnic cleansing” in the region in mid-March.

Eritrean refugees are also affected by the conflict. Two refugee camps in the north of the region, which once had around 20,000 people, have been destroyed and looted, the UNHCR said. Employees had reached the warehouse for the first time since last November. UNHCR suspects the facilities were destroyed in late December or January, but there is no certainty about this. Around 7,000 to 10,000 refugees have arrived in other camps or are staying in the region. So far, no one knows what happened to the others. It was also unclear whether people were brought across the border to Eritrea against their will, it said.

Ethiopia had long denied that Eritrean troops were present in Tigray. Prime Minister Abiy Ahmed first confirmed this on Tuesday. International pressure on Ethiopia to expel Eritrea’s soldiers had recently increased. Human Rights Watch, Amnesty International and the Ethiopian Commission on Human Rights (EHRC) accused the Eritrean troops of gross human rights violations. In addition, the UN Human Rights Office recently announced that it would work with the EHRC to investigate alleged human rights violations by all parties to the conflict in Tigray.

Ethiopia and Eritrea fought a bloody border conflict from 1998 to 2000 and had no diplomatic relations for years after that. It wasn’t until 2018 that both countries buried the hatchet. For this, too, Abiy received the Nobel Peace Prize in 2019.

A Tyrolean for space

Fintech unicorns will go public in 2021

Balance of the first week of shopping after the lockdown