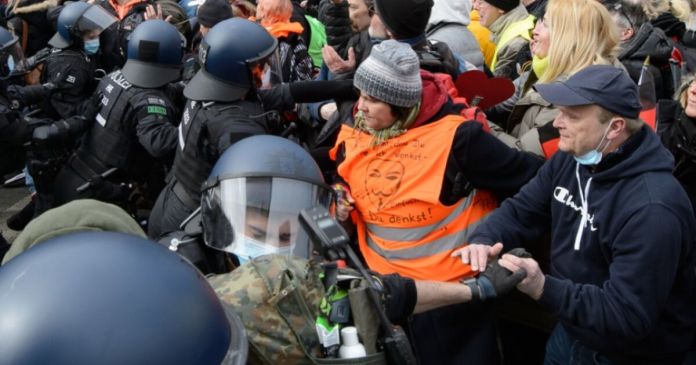 The demonstrations in long-suffering Italy were smaller. Around 70 people chanted “Freiheit, Freiheit!” In the Roman suburb of Ostia. and embraced demonstratively in front of the police officers. When they took off their helmets after being asked to do so by the demonstrators, they received spontaneous applause. The situation in Venice was more tense. There, some demonstrators refused to allow the police to carry out identity checks, and some tried to break the police cordon. In Turin, northern Italy, around 40 people were fined for not wearing a mask during their protest in the city center. One person was reported for resisting the police and one policeman was slightly injured in one hand, Italian media reported.

In Amsterdam, the police drove the participants of an unauthorized rally with water cannons from the central square in front of the Reichsmuseum. Around 1,000 demonstrators were encircled on the edge of the historic canal district, as the ANP news agency reported. Many of them were then taken to the outskirts by bus. There was initially no information about arrests.

In Sweden, too, the security authorities took rigorous action against the demonstrations. In both the capital Stockholm, Gothenburg and Malmö, the protests were stopped by officials on Saturday because they violated the maximum number of participants for public gatherings. In Gothenburg 50 to 70 people were there, in Malmö around 200. In Stockholm the newspaper “Aftonbladet” spoke from 200 to 300 participants.

After Sweden opted for a special route with relatively loose restrictions that was widely recognized internationally during the pandemic, the measures were tightened in the second wave. Since the end of November, a maximum of eight people have been allowed to come together for public meetings and gatherings.

Demonstrations against the corona restrictions also took place in five Croatian cities. In the capital Zagreb as well as in Osijek and in the Adriatic cities of Split, Dubrovnik, and Sibenik, thousands of people took to the streets and the majority did not wear mouth and nose protection. In Split, among other places, the demonstrators described the mask requirement as “tyranny”. Compared to other EU countries, Croatia has milder corona measures. For example, indoor catering is closed, but outdoor dining is allowed.

Corona skeptics without mouth and nose protection also took to the streets in the Romanian capital Bucharest and five other cities of the EU state on Saturday. In Bucharest and in Cluj (Kolozsvar / Klausenburg) in Transylvania, prominent members of the new extreme right-wing parliamentary party AUR were among the participants in the rallies. Religious symbols were also often visible. Many Orthodox Christian believers are dissatisfied with the restrictions on services.

Demonstrations were also held in Brasov (Kronstadt) in Transylvania, in the cities of Constanta and Galati and in Timsoara (Timisoara) in western Romania, which is one of the largest sources of infection in the country. The police announced that they would be fined against those demonstrators who violated the mask requirement and the rules of distance.

After the vaccination debacle, von der Leyen admits: “We were too...

Nove Mesto: Denise Herrmann is on the podium after catching up...

FC Bayern in Stuttgart called for: Flick distributes a lot of...