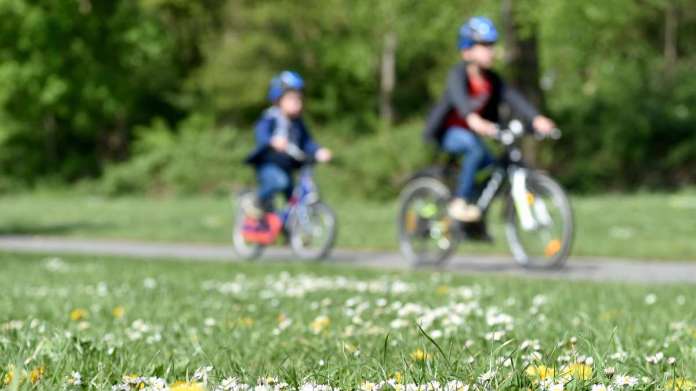 The weather in Germany is crazy. Spring starts in March with snow and frost. But that should change soon.

Update from Monday, March 22nd, 2021, 11:38 a.m .: Spring has so far been a disappointment in Germany across the board. Instead of bright sunshine and mild temperatures, the weather in March was mostly cool and frosty. However, that could change soon. “A total change in the weather is imminent,” predicts meteorologist Dominik Jung from the weather service “wetter.net”. Will the long-awaited warmth finally follow after the shivering weather?

In terms of weather, March could turn 180 degrees in the next few days, similar to February. At that time, after a real frost shock, top values ​​of up to 22 degrees followed. The same is now beginning for the first month of spring. Up Margarethe Germany is getting on the skin and causing rising temperatures. According to meteorologist Dominik Jung, up to 25 degrees are possible. The last days of the month should be really warm. But what does that mean for the weather at Easter?

Weather in Germany: exciting change in March – rotation by 180 degrees

In which weather the Easter eggs can be looked for in the garden in Germany is not yet entirely certain. “It is not yet possible to say whether this warmth will last until Easter. That actually remains very, very exciting, ”says Jung. However, it is certain that the days of March winter are numbered for the time being. However, a forecast clouded the mood of the meteorologist. “The precipitation forecast up to the last day of March is particularly bitter,” he says. Too little rain will fall from the sky by the end of March. So it will be another month that will end too dry. And the outlook for the coming months gives little hope of sufficient rainfall. “The probability of another spring that is too dry increases significantly,” says Jung.

Weather in Germany: After a cold shock, meteorologist gives hope for warmth

First report from Wednesday, March 17th, 2021: Offenbach – The weather in spring in Germany has so far disappointed across the board. Instead of full sun, the winter has been extended by a month. There is currently no trace of sunny days and warm temperatures, on the contrary: the next frost shock is coming and will bring freezing temperatures, snow and frost in some parts of the republic. Will this end soon? An expert and the current forecast at least give hope for the warmth turnaround.

“There have never been really warm and beautiful spring days this March. The warmest days of the year so far were at the end of February, actually in a winter month. The last week of February brought plenty of sun and top values ​​of up to 22 degrees Celsius. We can only dream of this currently in March. Instead it is wet and cold, there is rain again and again, from 300 to 400 meters sleet or snow showers. This will continue until Sunday. In the second half of the week, even colder air rushes to Germany at higher altitudes. Then up to minus 14 degrees are reached at a height of around 1500 meters, ”explains meteorologist Dominik Jung from the Q.met weather service to the weather portal wetter.net.

Weather in Germany: The beginning of spring in the calendar falls into the cold hole

The weather in Germany remains wintry for now. In the coming days it is even possible that there will be a deep snowfall that can bring fresh snow from 300 to 400 meters. There is even snow in the lower areas. In middle and higher altitudes, up to 15 to 20 centimeters of fresh snow can fall. So if you have already put on your summer tires, you should definitely leave the car behind.

“A really crazy weather situation in the middle of March. Saturday is the beginning of spring and according to current forecasts it falls into the cold hole. Exactly then there is the cold climax. Night frost below minus 10 degrees and daytime values ​​only a little above 0 degrees. It will be a cold start in spring 2021, ”emphasizes Jung.

But how long does Germany have to shiver? When does spring finally start and bring sunny weather? The cold shock in March could soon be over – even if people have to hold out a little beforehand. “It could slowly get warmer by the last weekend in March. Even maximum values ​​of up to 15 degrees or more are not excluded. Germany could now finally thaw ”, Jung gives hope.

Update on forecasts for Germany on our topic news about the weather.

His forecast coincides with the long-term forecasts of the American and European weather services for the months of April and May. Accordingly, spring is picking up again and probably wants to make up for what it left behind in March. There is even a threat of a wave of warmth in the weather in Germany. (Christian Weihrauch and Svenja Wallocha)

Other stars at the inauguration: The boss also sings for Joe...

Abivax: Setback in the fight against Covid-19 – shares collapse

All about the “Urban Tech Republic”: Berlin Senate releases money for...