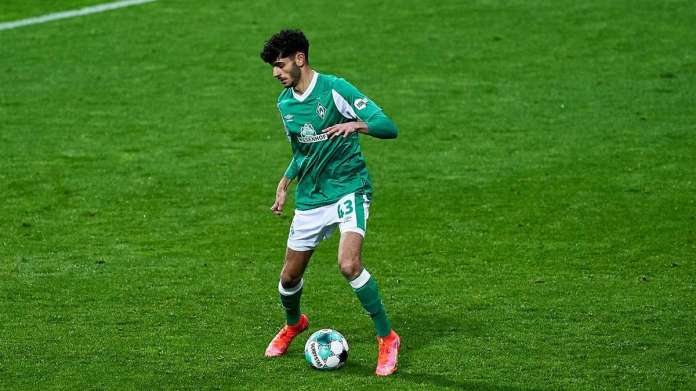 Bremen – At some point he noticed himself that it was going to be too much. Too much praise for Eren Dinkci. So Florian Kohfeldt, SV Werder Bremen coach, pauses in his remarks about the 19-year-old and says: “Now I have to be careful with the quotes because it shouldn’t get too big.”

He swallows what he was just about to say and prefers to let what he had said before take effect. And that was not exactly a small amount – especially not when you consider that the trainer of the SV Werder Bremen talked about a young man with just 14 Bundesliga minutes (spread over three games). Basically about a silent supporting actor in the big feature film with the disgraceful title “Season 2020/21”. Eren Dinkci Although he already had a big scene with the winning goal at 1-0 in Mainz, he has not been an actual size in the script to date. But he will, says Kohfeldt and initially takes a completely unbridled look into the future of Sturm talent.

Werder Bremen: Florian Kohfeldt showered Eren Dinkci with praise – and had to slow himself down

“Eren is developing extremely well with us. He brings with him elements that are simply in demand in today’s top football. He has an incredibly good finish from all positions, always finds ways Tore to do, with the left, with the right, with the head. He gets himself into these situations during training and is incredibly fast, ”says Kohfeldt, describing the attacker’s advantages, the Werder Bremen has not yet been released to the public. In other words: Dinkci was not allowed to give interviews yet. So it is not known how he envisions the future, whether his expectations of himself match those of the coach. Or whether he wants more in a shorter time.

But is that even possible? Even faster, even more? At Eren Dinkci things have already developed very quickly. Only in 2019 did he move from SC Borgfeld to the Werder youth team, a year later he moved up to the U23, another six months later he made his Bundesliga debut with the goal against Mainz 05. So you can say that Dinkci like a rocket shot into orbit of the planet Bundesliga. And now? Now we come to the point where Kohfeldt doesn’t want to say too much. “I’ll leave it at that for now. But you’ve known me long enough, “he explains to his audience in a small media discussion,” when I talk about a young player like that, it means something. “

Werder Bremen: Eren Dinkci should be “firmly in the regular squad” next season

And it means that: Kohfeldt has no doubt that Dinkci will make his way in professional football. That the up-and-coming striker will be “very firm to the Regular cadre or at least belongs to the wider group of those who play very regularly, “the coach has already told the player internally. But he has already announced it externally as well. And now – as if to confirm – repeated. Afraid that Eren DinkciWho lacks training in a high-level training center and could not meet expectations does not exist. And that the advance praise from the coach might come too early, either. “Eren can handle it very well,” claims Kohfeldt and explains again in two sentences why he believes in Dinkci so much: “He finds the means to score goals. That’s not a bad quality. “

However, the example of Josh Sargent has only just shown how difficult it can be for young, instinct-guided goal scorers Talent to preserve, although more and more tactical constraints are added on the pitch. Sargent is only just beginning to successfully combine one with the other. Dinkci is two years further back, but Kohfeldt sees that in every training session Progress: “I am impressed by the speed at which he learns.” The coming season will then show whether Dinkci has gone from supporting actor without text to – let’s say – rival of the leading actors in the storm of the SV Werder Bremen can be. (csa)

Lazio Rome keeper Strakosha on BVB: “I would be lying if...

iPhone 12 mini could not have a successor

Hauser rewards himself with steak, ski tours and visits to grandma