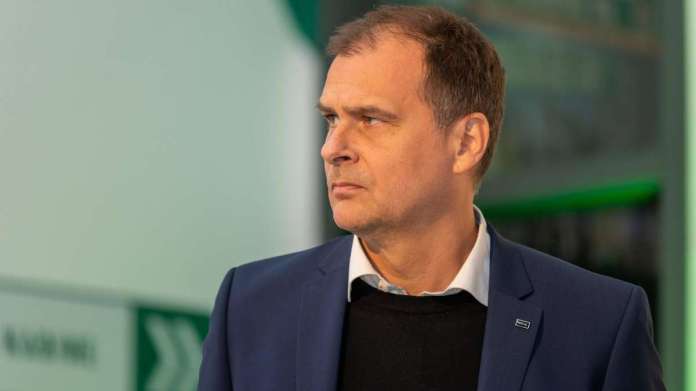 Bremen – This season there should be no more viewer income for SV Werder Bremen in particular and professional sport in general – maybe not at the beginning of the new season either.

Nevertheless, Werder is boss Klaus Filbry optimistic that the Bundesliga club will survive the corona crisis well. Filbry explains in im how it should succeed, which the 54-year-old expects from Frank Baumann, Clemens Fritz and Jörg Wontorra in particular Interview with the DeichStube.

Mr. Filbry, was the contract extension with energy supplier EWE as sponsor so important to demonstrate that the lights do not go out at Werder despite the financial problems?

So the lights won’t go out either way. But we are of course pleased that a long-standing partner is continuing on the path with us. In times of Covid this is not so easy. But we have managed to extend long-term with almost all of the top sponsors – in some cases at better conditions.

According to the DFL business report, the Bundesliga clubs were recently able to increase their advertising income by an average of five percent. Where is Werder included?

A little bit about that. It is difficult to compare the Bundesliga clubs because, for example, the involvement of VW in Wolfsburg or Red Bull in Leipzig is not in line with the market. Nevertheless, I count Werder in the top seven or eight in terms of advertising income. As a traditional club that has positioned itself in a modern way, we are still attractive to sponsors.

But not in all industries. In the field of automobiles, there has been no sponsor since VW left.

The automotive industry has changed its sponsorship overall and made itself rare in the Bundesliga. You want to, but you can’t always have everything. But of course, the goal must always be: continue to grow and optimize yourself. Digitization is an important topic here, as is sustainability. We and our partners attach increasing importance to this. And I would also like to emphasize that we are now making very good money with our esports division.

Given the Bundesliga clubs’ financial problems, is it conceivable that there will be more advertising space on the jerseys?

The size of the space for the sleeve sponsor will be adjusted to the international competition in the new Bundesliga season. No more is planned because everyone understands: Quality comes before quantity. There will be no excesses like in other leagues or sports.

Then what else can I do to increase revenue?

The future goes in a different direction: I am thinking of a digital sales platform, for example – analogous to the Amazon marketplace. Why can’t Werder also sell tram tickets or electricity for its partners via its app? Eintracht Frankfurt is doing a very good job there. We think about that too.

Last season’s balance sheet shows negative equity. The minus should be even bigger this season. Does this put the license in jeopardy or are there at least conditions for the next season?

No. This procedure has been adapted because of the consequences of the corona crisis, which affect everyone. We will get the license without any conditions, but of course we have to prove our solvency by the end of June 2022. One thing is certain: especially due to the ghost games, we are missing 35 to 40 million euros across seasons. We secured this season in December with a loan of 20 million euros. But we don’t know how the balls will fall. When will we have audience income again, will the transfer market get going again? In order to have a certain amount of legroom for these imponderables in the next season, we are looking at a medium-sized company bond. Should things develop differently, i.e. positively, then this bond gives us the opportunity to invest in strategic topics – in digitization, in sustainability and, above all, in the training and further education of our players.

How will this debt ever be repaid?

That must be the goal for the next five or six years. That means: we have to do business wisely and successfully. We have to implement rigid cost management and focus on the important issues. We identify the relevant growth areas through our 2025 strategy process and will implement them consistently. A good squad management policy is the basis for the next few years. This procedure has been agreed with the Supervisory Board.

However, next summer is likely to be quite difficult: experienced players like Theodor Gebre Selassie and Niklas Moisander will then be gone, top performers have to be sold – and there is no money for new players. How is that supposed to work?

Either way, it will be a difficult summer of transfers because a lot of money has simply been withdrawn from the system. All of the clubs had no audience income and received less TV money. Large player sales will therefore only be very limited.

But that makes it even more difficult for Werder, because you have always emphasized that transfer proceeds are essential.

We have three transfer periods: summer, winter and the phase after the next season. We want to sell, but there will be no panic selling.

But without sales there shouldn’t be any opportunities to strengthen the team, which seems indispensable in midfield.

I am convinced that Frank Baumann and Clemens Fritz will implement an intelligent management policy. We want to structurally improve the squad, even if we know that it will be a challenge with less money. But it makes sense to look into markets that are not that overheated. Frank has shown in the past – for example with the transfers of Jiri Pavlenka or Thomas Delaney – that it is possible to get top players for relatively little money.

Werder Bremen: Klaus Filbry believes that openness about money in the Corona crisis has helped the Bundesliga

What role does coach Florian Kohfeldt play in this?

A very important one. He has a long-term contract, enjoys being here and does a good job. Florian also learned his lessons from last season.

But he is also repeatedly associated with other clubs.

That may be so. But both he and we have made clear statements about the future.

But what perspective can Werder even offer him?

All clubs are badly shaken by the corona pandemic – apart from perhaps clubs like Wolfsburg, Leverkusen or Hoffenheim with their shareholders behind them. Everyone needs to stay competitive with less money. We will face this challenge. It is still possible to be successful through good work and decisions in the sporting field. Frankfurt and Mönchengladbach have recently shown that.

A year ago you were the first club boss to speak very openly about the financial difficulties. Most of the other clubs were more cautious – and Werder was henceforth a bankrupt club. Was your openness a mistake and was it harmful to Werder’s image?

FC Bayern and Borussia Dortmund have also very clearly named the shortfall in income and even spoke of 100 million euros. So I wasn’t alone – and I would do it again. It’s just important to be transparent and honest. We helped the Bundesliga with it.

At the time, it was about whether professional football could be played again, although almost everything was still closed, even the schools. We have shown with our openness that there is an economic need for us to keep playing. With a corresponding hygiene concept, of course. If the game had not continued, some clubs might no longer exist today.

Back then it was said that Werder and Schalke would be the first to hit.

Much negative has been reported. But there was also a lot of positive feedback – in the media and also from clubs like Borussia Dortmund, who contacted us and thanked us for our honesty. Our behavior would have helped in the discussion with politicians.

There is no longer any transparency with regard to the salary waiver by professionals. Why?

We have twice implemented a salary waiver with the team, they have made their contribution. We have agreed that we will no longer speak publicly about further content because it is confidential. I ask you to respect that.

We’re not going down! I am convinced of the quality of the team and the coaching team. But basically: Our contracts with the players are designed in such a way that we only have to pay 40 to 50 percent of the salaries in the second division. And with us every player has a valid contract for the second division. This would allow us to largely compensate for the lower TV revenues.

After the almost relegation last season, things have become more restless around Werder. An opposition has formed with Jörg Wontorra at the top. Are you afraid of a big bang?

I think it’s perfectly legitimate for criticism to be expressed after last season. After an extensive analysis, we tried to fix the bugs and are now well on the way. At a traditional location like here, the people are very emotionally involved – and that’s a good thing. But what has always distinguished us as a club – especially in competition with the other Bundesliga clubs – is that, despite differing opinions, we lived a unity for Werder and represented it to the outside world. That’s a great strength. With Jörg Wontorra, I have the feeling, as he said recently, that he too understood that.

How do you mean that exactly?

Whenever a factual discussion turns into an overly emotional and above all person-driven discussion, it becomes dangerous for traditional locations. You can see that in the examples of Cologne, Gelsenkirchen and Stuttgart. One can have very controversial discussions, but it always has to be done in the subject matter and with respect for one another, as is traditional in Bremen.

Working from home gives the platform to Refurbed a boost

Official website taken offline – the end of the series? 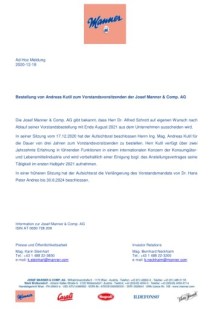 Child does not wear a mask – family thrown from airplane...

This is how expensive the first electric SUV from VW will... 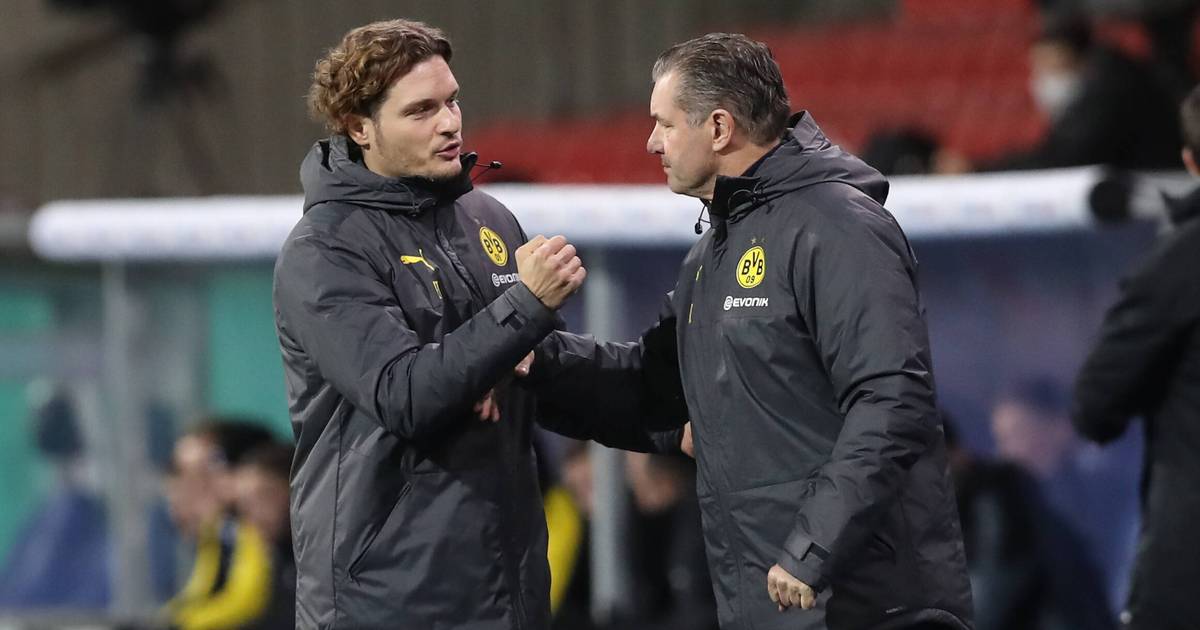 BVB is sticking to Edin Terzic