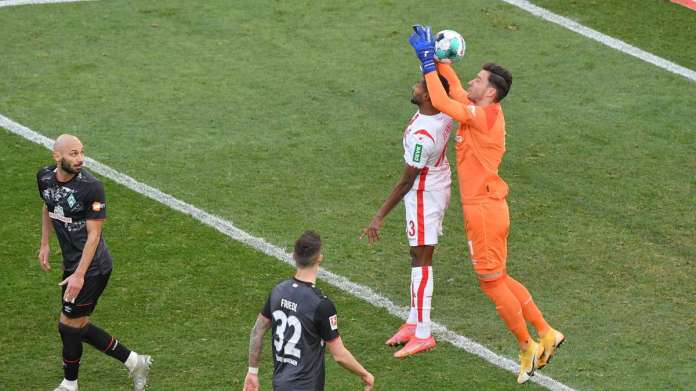 Cologne – After the game there was only one topic: Was it a foul on Jiri Pavlenka or not? For Florian Kohfeldt there were no two opinions, the coach of SV Werder Bremen considered the equalization of 1.FC Köln to be irregular, was particularly annoyed with the video assistant (VAR) and judged after the 1: 1 (0: 0 ): “This is a wrong decision for me – both in terms of content and in depth. And that is the game-winning scene that brings us the draw and takes the win. “His Cologne colleague Markus Gisdol saw it very differently:” I think nobody can complain that this goal will be given. “

It was about the scene in the 83rd minute. Werder Bremen led 1-0 through Josh Sargent’s goal (65th) when a cross from Noah Katterbach sailed into the Bremen penalty area. Actually a safe proposition for Jiri Pavlenka, but the keeper did not get to grab the ball, but rather hit it on his head in a dogfight with Emmanuel Dennis. And so the substitute could Jonas hector then effortlessly shoot the ball into the empty goal to make it 1: 1 (83rd). At first it looked like a bad goalkeeping mistake. But the TV pictures showed that Dennis had touched Pavlenka’s arm with his hand high up in the air and thus decisively disrupted the catching movement.

Foul or not? Jiri Pavlenka scene causes trouble at the Bundesliga game between Werder Bremen and 1. FC Köln

“Dennis pushes Pavlenka’s arm away – and a goalkeeper needs both arms to catch the ball,” analyzed Florian Kohfeldt at Sky and later summarized again briefly: “If you take his arms, then it’s irregular.” It is also irrelevant where the action takes place – in this case outside the five-meter space. “It’s not about a protection zone for a goalkeeper. But a goalkeeper is allowed to shake hands in the penalty area. But if his hand is pushed away, then he cannot catch the ball, so it is a clear foul. “

Referee Matthias Jöllenbeck saw it differently, his pipe remained silent. But then it got interesting and from the point of view of the SV Werder Bremen pretty annoying. “Mr. Jöllenbeck told me on the pitch that he only checked the scene for handball and therefore didn’t look at it again,” reported Kohfeldt. This is what the official referee channel of the German Football Association (DFB) announced. The Werder coach explicitly took Jöllenbeck under protection, his assistant in front of the screens, in this case Bastian Dankert, but the duty: “He has to Video referee see. From my point of view there is no discussion. “

Florian Kohfeldt: “Wrong decision” – Should the VAR have intervened for Jiri Pavlenka at Werder Bremen against Cologne?

What stood out: Florian Kohfeldt In spite of all the anger about the highly controversial goal conceded, he remained pretty calm, expressed his criticism very objectively – without much emotion. And on Werder’s website there are only statements from the trainer on the topic of the day. Players like goalscorer Sargent or defensive boss Toprak are also quoted, but not in connection with the one clearly stated by Kohfeldt “Wrong decision”. May want to Werder Bremen Don’t open the barrel too wide so as not to fall out of favor with the referees’ guild during the crucial phase of the season.

The now well-known referee podcast “Collina’s heirs”, whose operators also work as experts for Sky, judged directly after the game as follows: “For me it is a rule-compliant duel in the air, the Jiri Pavlenka loses. Dennis uses his arm in the jump movement to the header and not to hinder the goalkeeper. The fact that Pavlenka can’t get the ball because the arm is there doesn’t make it irregular. ”The tweet caused great outrage, especially among Werder fans – and should certainly shake the head of the SV Werder Bremen coach. (kni / csa)

And for me it’s a rule-compliant duel in the air that Pavlenka loses. Dennis uses his arm in the jump movement to the header and not to hinder the goalkeeper. The fact that Pavlenka can’t get the ball because the arm is there doesn’t make it irregular. https://t.co/cAOOnWRwfw

“No correct goal” – Werder Bremen is annoyed by the video referee

For Florian Kohfeldt was the matter after the highly controversial settlement of the 1. FC Cologne against his SV Werder Bremen at the 1-1 final: “It wasn’t a correct goal for me.” Cologne attacker Emmanuel Dennis had Werder keeper Jiri Pavlenka after touching a flank with the hand on the arm. Pavlenka could not catch the high ball, got it on the head – and Jonas Hector benefited, who was able to shoot into the empty goal.

“Dennis pushes Pavlenka’s arm away – and a goalkeeper needs both arms to catch the ball,” analyzed Florian Kohfeldt at Sky. The Werder coach was surprisingly composed, other colleagues would probably have been much more angry in this situation. Because the story was even more bitter for Werder Bremen. Actually, video assistant (WHERE) Bastian Dankert had to jump to the side of the referee Matthias Jöllenbeck, the TV pictures were pretty clear what the foul of the 1. FC Cologne concerns. But the communication between the referees didn’t seem to work at all.

“Mr. Jöllenbeck told me on the pitch that he only checked it for handball and therefore didn’t look at it again,” reported Kohfeldt. This is what the official channel of the German Football Association (DFB) had for its referee proclaimed.

For Florian Kohfeldt and Werder Bremen was that incomprehensible: “I told Mr. Jöllenbeck that I generally found his game management very good. But he just has to look at it, there is no discussion from my point of view. It’s not about a protection zone for a goalkeeper. But a goalkeeper is allowed to shake hands in the penalty area. But if his hand is pushed away, then he can’t catch the ball, so it’s a clear foul. “Goal scorer Hector saw it differently:” It wasn’t a foul for me – it was seen that way, that’s why I can with it live. ”(kni) Also interesting: Werder Bremen scores against 1. FC Köln: Josh Sargent strong, Kevin Möhwald pale.

Bill Belichick doesn’t want to go to Donald Trump in the...

Teachers warn of chaos at school start-up during pandemic

Corona did not break out in Wuhan after all? Researchers...

Winter returns to Germany – with plenty of snow

Norway is the first country with an electric car quota over...