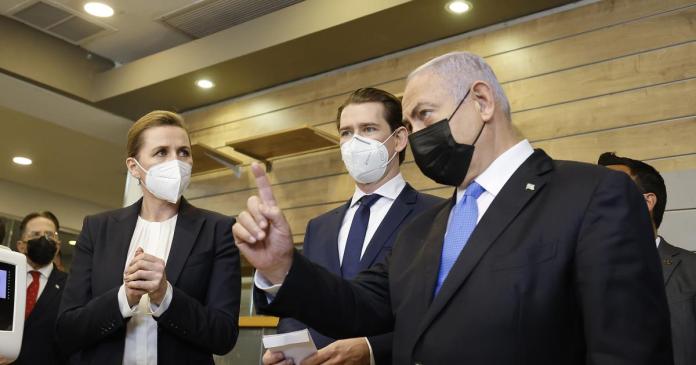 “We are slowly coming out of the crisis in Israel,” said Netanyahu. “We’re not immune yet, but we’ll get there.”

What exactly was discussed now? The things that the three quoted at their press conference were not really tangible. Only one thing is clear: Israel, Denmark and Austria want to jointly set up a fund to promote research and production of vaccines.

“Nobody knows when the next epidemic will strike,” said Netanyahu. “We have to be prepared for it.”

Chancellor Kurz once again stated that “the world looks to Austria”. In short: “Israel is the first country to show how the epidemic can be defeated.”

The Austrian once again mentioned that it was in particular Netanyahu’s 2020 warning to him, Kurz, that led to the first quick lockdown in Austria.

The three heads of government have not yet been able to say how much money will flow into the fund. “Let’s get back to work, we can’t tell you yet,” Netanyahu told journalists. And then, when he realized that that could possibly be a little too little, he said: “But be sure: we mean the matter very, very seriously.”

In non-stop use since March: Photo of a comforting doctor goes...

Russia: mother gives birth to son – and dies of Corona

Will the electric car soon be driving with garbage? Miracle...

Portugal captain Cristiano Ronaldo beside himself after losing the winning goal...

From Berlin to Hamburg and Munich: Flixbus is offering trips again...