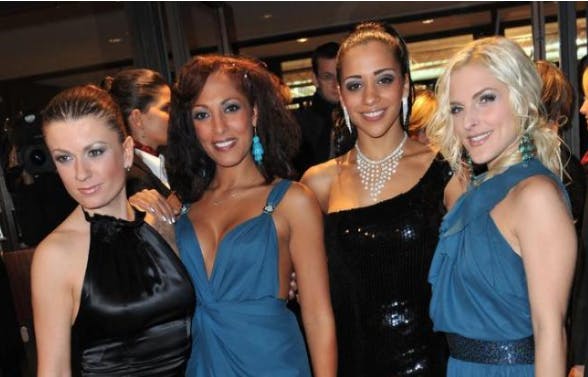 I owe the German pop star group No Angels das Trauma of my professional life. That’s why I wasn’t on good terms with her for a long time – until the comeback.

There are moments that are forever burned into your memory. One of them was the No Angels’ first appearance and autograph session in 2001 in the Tivoli shopping center in Spreitenbach.

Nadja Benaissa, Lucy Diakovska, Sandy Mölling, Vanessa Petruo and Jessica Wahls were at the time the Görl’s of the hour, her hit “Daylight” was constantly pounded up and down by all the stations. Their fan community was intergalactically large – also in Switzerland.

Armed with a pad, pen and camera, I went to the fishing encounter in the Shoppi Tivoli. As a young people reporter for a commuter newspaper, I was looking forward to the angelic mini-concert in the shopping temple. In a good mood, I went to Spreitenbach.

But on arrival I suddenly lost my good mood. The Tivoli was full to bursting, the screaming level of the (mostly young, female) fans dangerously close to the tinnitus limit.

I cursed inwardly – very loudly. Instead of a pad and pen, I should have done a report in ice hockey gear. But even with that I would probably not have come close to the stage. So I bravely struggled step by step forward. Deeper and deeper into the crowd, the beguiling cloud of too much perfume and deodorant. The olfactory death.

And that’s how the girl group sounded back then. Vanessa Petruo, Sandy Mölling, Nadja Benaissa, Jessica Wahls and Lucy Diakovska are the winners of the talent show “Popstars” on RTL2 in 2000.

The further I immersed myself in the crowd, the more uncomfortable it became. I had the camera clawed like a rugby ball, and so did the pad and pencil – somehow. As is well known, necessity makes inventive.

But the ordeal didn’t pay off. The announced mini-gig had to be called off. The mall hadn’t expected such a rush – the sparse security was completely overwhelmed.

Luck in misfortune: I only lost the camera cover in the crowd. There was scolding at the editorial office for that. Instead of reporting on a concert, I reported on the no-angel concert fiasco in nowhere in Aargau.

A continuous up and down

After the meteoric rise and countless prizes, the band disintegrated bit by bit until the farewell tour in 2003. In 2007 the legendary girl group made their first comeback, and in 2008 they performed at the Eurovision Song Contest in Belgrade. A fiasco, they landed 23rd out of 25 participants with their song “Disappear”. Two years later, the Hammmer, Nadja Benaissa, was arrested in Frankfurt in April 2009. The reproach? Unprotected sex even though she knew she was infected with HIV. Too much for the pop singer, she said goodbye to the band in July 2010.

From then on you go your own way, concentrate on your own career. There are only a few joint appearances.

And again and again the German media speculate about a comeback of the fallen non-angels. Until the desired headline comes true.

They reappear like a phoenix from the ashes. Stronger than ever and with new plans in the bag. Nadja Benaissa, Sandy Mölling, Lucy Diakovska and Jessica Wahls – the Spice Girls made in Germany – are working flat out on a new album, as they recently revealed in an interview. How is that supposed to sound and come out? The four (B) angels don’t let themselves look too much into the cards. Would be boring too.

There is a regular midday column on workdays at 11.30 am and sometimes only at 12 noon on “blue News” – it revolves around well-known personalities, sometimes also unknown ones – and sometimes an asterisk will appear.

That is why there are many more corona cases in Germany

Adapted strategy: In an emergency, Austrian has to reduce the size...