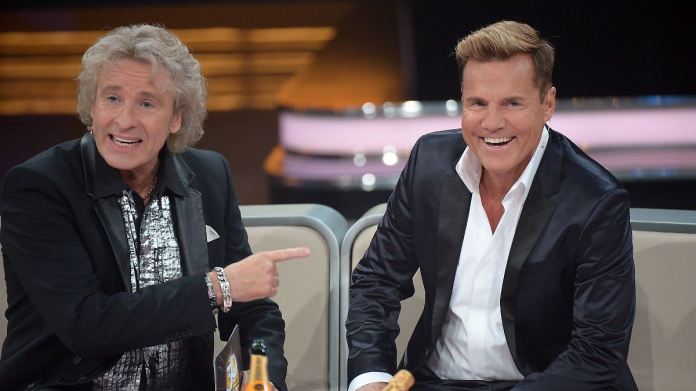 Does Dieter Bohlen like it?
Gottschalk becomes a substitute juror in DSDS final shows

“Germany is looking for the superstar” is aiming for its climax this year. But that without Dieter Bohlen. He has called in sick for the semifinals and finals. It is now clear who will replace him on the jury’s desk in the two shows. It is an old friend – also for planks.
There was never before in 18 seasons “Deutschland sucht den Superstar” (DSDS): The decision of who will be crowned the winner of the show is made without Dieter Bohlen. Poptitan told RTL that he was sick. Therefore, the semi-finals on Saturday and the final on April 3, each at 8.15 p.m. on RTL, would unfortunately have to take place without him.

In other words: Only Maite Kelly and Mike Singer remain in the DSDS jury this year. “Maite and Mike have done a very good job so far and will also handle the live shows on their own,” said RTL entertainment director Kai Sturm. Nevertheless, one does not want to rule out looking for a substitute juror.

And lo and behold! This substitute judge has now been found. It is none other than Thomas Gottschalk! “RTL asked me and I agreed spontaneously. Firstly, one titan won’t let the other down and secondly, I had nothing better to do. The candidates who have made it this far can all sing great, and the decision is up to the audience anyway. So I can’t go wrong, “said Gottschalk in an initial statement.

RTL entertainment director Sturm added: “Dieter’s footsteps are big. If someone has the right shoe size, it’s Thomas Gottschalk. I’m very happy that Thomas spontaneously enjoyed the idea of ​​jumping in as a guest juror in the two live shows. With him we are gaining a real show giant for DSDS, whose experience and competence will surely inspire our finalists again. ”

Ute Biernat, head of UFA Show & Factual GmbH, who is responsible for the production of DSDS, was also happy: “I’m really happy that we were able to win Thomas Gottschalk for the two DSDS live shows. Thomas is THE entertainer of German television and the jury made up of Maite Kelly and Maike Singer, who shine with their musical expertise, will complement them perfectly with their humor, charm and star appeal. “

“He knows his way around pop music”

The paths of Bohlen and Gottschalk have crossed time and again in the past. When, for example, Modern Talking celebrated a comeback in 1998, they did so with an appearance in “Wetten, dass ..?”, Moderated by Gottschalk at the time. After Gottschalk’s departure from the ZDF show, Bohlen brought him into the jury for “Supertalent” in 2012. Gottschalk only stayed there for one season.

The two entertainers always liked to poke at each other. Most recently, Gottschalk revealed, for example, that he didn’t really feel comfortable with the “Super Talent”. At the same time he also found words of praise for the 67-year-old: “You can say what you want about Dieter: He knows his way around pop music. His comments on DSDS weren’t always fair, but mostly better than what’s there was offered vocally. ”

“Deutschland sucht den Superstar” can not only be seen on RTL, but also on TVNOW at any time. There is also more information about the program at RTL.de.

Heidenheim can continue to dream: Darmstadt is shooting the game shot...

Vaccinations in Bavaria from January 5th – countries want to vaccinate...

Bayern in the post luck: Derby trembling victory thanks to Lewandowski Bottleneck, anger, pain and anticipation: this is what the paddock in...