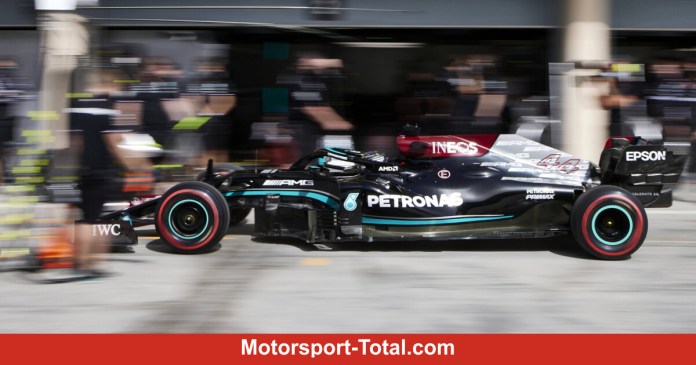 (Motorsport-Total.com) – Mercedes has confirmed that the concept of the flatter angle of attack was hit harder by the cuts in aerodynamics in the 2021 season. That gives the potential title fight against Red Bull a new and interesting dynamic.

Mercedes drives with less angle of attack than Red Bull, for example

Because Mercedes and Red Bull differ fundamentally in the design philosophy of their cars and form the two opposing extremes in terms of angle of attack. It will therefore be fascinating to see how the reigning world champions will cope with this setback.

Mercedes hopes to regain the lost downforce on the underbody and diffuser as soon as possible. Let’s take a closer look at why those teams that bet on a flat car were hit harder by the rule changes.

Explained: What is the angle of attack?

The term “rake” is used in the technical jargon of Formula 1 to describe how much a bolide is turned on – i.e. how much the rear protrudes in comparison to the front and thus more or less space is created under the underbody.

The angle of attack is particularly associated with the Red Bull cars since 2009. Because the cops around star designer Adrian Newey have been relying on a particularly steep tail for years. This philosophy has been adopted more and more by the competition.

It is widely accepted that a car with a steeper angle of attack, when the conditions are right, is able to generate more downforce through the underbody and diffuser than one with a flatter rake. This has to do with the extra volume that is generated between the underside of the subfloor and the roadway.

Which of these aero tricks is the big hit?

Put simply, Red Bull’s steeper rake potentially increases the volume of its diffuser due to the increased ground clearance. A few years ago, Mercedes took a completely different approach, with a flatter angle of attack, which is related to the longer wheelbase.

As a result, the team creates more area on the subfloor, which creates the volume in the area in front of the diffuser. However, if this air cannot be effectively sealed at the ends of the subfloor, there is potential for a loss of downforce, which can instead lead to undesirable side effects.

When Formula 1 announced new underbody rules for 2021 – among other things, a triangular area was cut out in front of the rear wheels – the first assumption among experts was that cars with steep inclines, like the Red Bull, could suffer more from them.

However, the teams quickly familiarized themselves with the changed regulations and adapted their cars. It also became clear that the focus of the changes would shift to the many slots and bulges on the underbody, which were also limited.

That seems to hamper Mercedes’ ability to properly seal the sides of the underbody. Because the holes and slots seem to have contributed to the fact that the sub-floor became a kind of extension of the diffuser.

This loss seems to be particularly painful for Mercedes. And while some might think that the team could solve the problem simply by raising the rear of the car to increase the effect of the diffuser, this suggestion has to be countered: Formula 1 design is not that simple.

The entire aerodynamic concept of the Mercedes racing car, and the shape and design of the wheel suspension, are designed for a flat angle of attack. Simply lifting the rear end would only cause more problems on the W12.

That is how much influence the Pirelli tires have

Not only does the concept of the shallower angle of attack seem to be damaging Mercedes, but also the changes that Pirelli has made to the new tires. The manufacturer has revised the tires for the 2021 season so that the rubbers can withstand the increased loads more easily. In addition, the group will prescribe lower pressures.

This is critical because it means teams not only have to focus on new rules but also have to deal with a revised tire design. That increases the aerodynamic challenge significantly as you now have a relatively unknown variable amidst all the other engineering changes.

James Allison explains: This is new about the Mercedes W12

The aerodynamics and engine, explains James Allison, are completely new on the Mercedes W12, but the survival cell was simply removed from the W11 More Formula 1 videos

This is a battle that aerodynamicists have been fighting for decades, but which seems to have taken center stage lately as teams make profits with tiny tweaks. You shouldn’t just look at the rear tires.

The front tires must also be taken into account, since a different deformation characteristic here means that every flow structure that is created to cope with the turbulence it creates must also be adapted to maintain performance.

So the teams don’t just have to make adjustments to those parts directly affected by the rule changes, but pretty much the entire aerodynamic surface of the cars, as they have to reconnect the airflows that were interrupted by the rules and the new tires.

For Mercedes, this has so far meant taking aerodynamic countermeasures at every nook and cranny – from the front and middle section to the rear of the car.

Corona: Pankow’s incidence has recently increased sharply – these are the...

Nursing homes in Vienna and Lower Austria get vaccine first

Alternatives to lockdown: At least in the garden bar

New edition of the duel with Macron ?: Le Pen grabs...