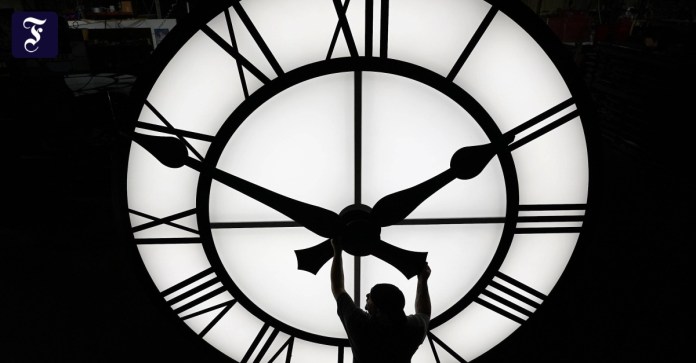 EIt’s done: On the night of Sunday, the clock hand was moved from two to three o’clock – daylight saving time applies again. The ritual in the European Union should actually end this year. Why the time change still exists – and whether an end is in sight.

Why should the clock change be abolished at all?

In 2018, the EU Commission asked citizens about the topic. The result of the online survey: 84 percent were in favor of an end to the change between summer and winter time. In Germany, approval is particularly high. The reasons given by the participants, for example, are that the change is damaging to their health. The then Commission head Jean-Claude Juncker announced in 2018: “The time change should be abolished.” The EU Parliament voted in March 2019 to abolish it in 2021.

What has happened since then?

Not much. The European Commission says that the ball lies with the 27 member states. They have to come to an agreement and clarify whether they want permanent summer or winter time. So far, the governments in the EU Council have not found a common position. Also to the annoyance of the members of the EU Parliament: Its Vice-President Katarina Barley (SPD) told the newspapers of the Funke media group that the topic was an example of how often legislative proposals in the Council of Member States were petered out.

What is the German position?

The federal government wants to prevent summer and winter time islands in Europe, said a spokeswoman for the Ministry of Economic Affairs. The Commission has not yet submitted an impact assessment – but it is necessary in order to deal with the subject in the Council in a “purposeful manner”. According to the information, Germany did not push the topic forward during the Council Presidency last year. And when asked, the Commission states that an impact assessment is not necessary.

Incidentally, Germans have a clear opinion on the question of whether there should be permanent summer or winter time: According to a representative study by the Technical University of Ostwestfalen-Lippe and the market research institute mo’web research, the majority are calling for permanent summer time. This would mean that in winter it would stay dark longer in the morning and light longer in the evening.

Is the end of the time change in sight?

Portugal currently holds the Council Presidency. A request as to whether the country had put the issue on the agenda went unanswered. So it is in the stars whether the six-monthly turning of the clock will stop soon. A majority of people in Germany have already lost faith in it: 63 percent of those surveyed have written off the project for the foreseeable future, as a representative survey by the opinion research institute Forsa on behalf of DAK-Gesundheit has shown. A spokesman for the EU Commission also gave little hope last week: “The clock did not move forward to change the time,” he said.

VfB Stuttgart against RB Leipzig: With Wamangituka and Mavropanos against Leipzig...

News in the video: New videos of the Capitol storming are...