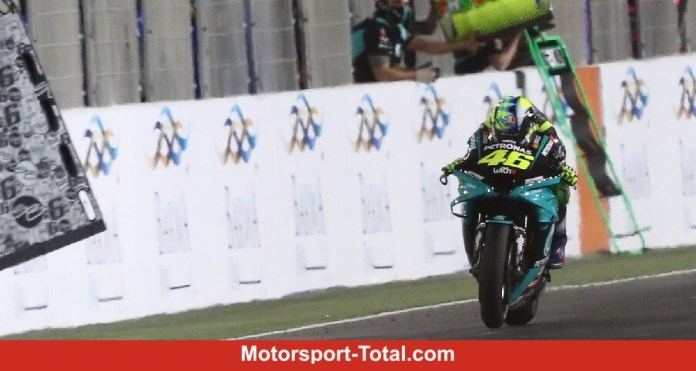 (Motorsport-Total.com) – On Saturday, Valentino Rossi celebrated fourth on the grid after MotoGP qualifying in Qatar. But the hope of repeating his success from last year when he clinched his only podium of the season at the Losail International Circuit was quickly dashed in the race on Sunday.

After the start, Rossi was in sixth place directly behind his Yamaha brand colleagues Fabio Quartararo and Maverick Vinales. But unlike them, for the Italian, the rest of the race mainly went backwards instead of forwards.

“I got off to a pretty good start. It wasn’t that bad compared to Quartararo and Vinales,” said Rossi. “But the Ducatis are much stronger than us in this point and reached the first corner with correspondingly more speed. The start was not bad for our conditions. The problem is that they start better.”

Rossi: We put too much stress on the rear tire

In fact, shortly after the start, with Francesco Bagnaia, Johann Zarco, Jack Miller and Jorge Martin, four Ducatis were in the lead. Nevertheless, Vinales in particular succeeded in challenging the red competition and in the end even leaving them behind.

Rossi, on the other hand, had nothing to do with the fight for the top spots early on. “We certainly expected more, especially after yesterday’s qualifying,” he admits. “But I struggled in the race. After a few laps I had problems with the tires. Unfortunately, that happened to me on Friday.”

“It looks like I’m putting too much pressure on the rear tire for some reason and the performance is suffering as a result, so I’m not fast enough. That was the case today too. We were hoping it would go better today, especially those Temperatures were a bit cooler, but unfortunately the feeling was similar, “explains Rossi.

Praise for Vinales: “Positive that a Yamaha wins”

As a result, the race turned out to be difficult for the Italian. He lost many positions and finally crossed the finish line in twelfth place, almost eleven seconds behind the leaders. “So that wasn’t the race we were expecting,” he says.

This also applies to his team-mate at Petronas-Yamaha, Franco Morbidelli, who even missed the points in 18th place. “I don’t know what was going on with Franco. I think he might have had a problem with the bike,” speculates Rossi.

Despite his own disappointment, he sees the fact that a Yamaha rider triumphed in Qatar with Vinales as a good sign: “It’s positive that a Yamaha has won. They have a different setting compared to us. That seems to work better. Quartararo too.” was strong. That’s a good way to understand where we can improve. “

In this context, he also congratulates the former teammate. “He drove incredibly,” praised Rossi Vinales. “At the beginning we were still together, but he showed a strong race. Zarco and Pecco also had a good race and made it onto the podium. The Suzukis were also strong.”

While he couldn’t compete with them this time, Rossi successfully dueled KTM riders Miguel Oliveira and Brad Binder for twelfth place towards the end of the race. It was especially hairy between Binder and Rossi, as the South African reported after the race.

Champions League – Additional kilometers to travel: Where relocated games are...

Soccer: Highlights in Manchester and Madrid

Globus will take over these 16 branches from Real

ATX with a good start to the week – Lenzing, Erste...