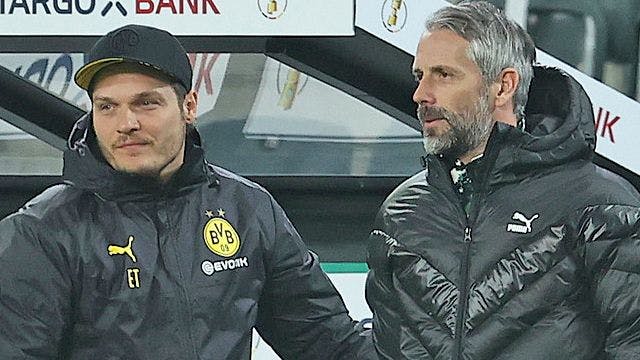 The outgoing Marco Rose has yet to get such backing as from his sports director Max Eberl at Borussia Mönchengladbach. According to Eberl, Rose will remain the coach even if there is another defeat against Leverkusen. The situation gnaws at him.

Not only Borussia Mönchengladbach is in crisis, but also coach Marco Rose. The 44-year-old admitted that for the first time after the unfortunate cup-out in the explosive quarter-final duel against his future club Borussia Dortmund. «You can believe me that the situation also challenges me. That doesn’t leave me behind either, ”said Rose after the 0: 1 (0: 0) on Tuesday evening. The DFB Cup game was the sixth winless competitive game in a row for the Champions League round of 16.

Since Rose announced a good two weeks ago that he wanted to make use of an exit clause in his contract in the summer to switch to BVB, the mood in Gladbach has clearly deteriorated. Borussia vom Niederrhein have lost all four competitive games since then. A season without a European Cup threatens in the coming season. «Today we have already brought a lot to the field. I can only compliment the team today », said Rose anyway about the appealing but hapless performance of his team.

Despite the negative streak, the players insisted that there was no problem between the team and the coach. “Just like before”, the work with Rose continues, said national player Jonas Hofmann. “With the point, of course, that we need results again, that we have to win again. Otherwise it goes on in the same way, ”said the offensive player.

Eberl says to Rose: “I don’t see the reason why it shouldn’t work”

Sports director Max Eberl had recently repeatedly emphasized that he wanted to end the season with Rose. Another defeat on Saturday against direct competitor Bayer Leverkusen will not change that. “I don’t see the reason why it shouldn’t work,” said Eberl.

“That shows what qualities he has as a sports director and as a person,” said Rose in support of Eberl, who, not for the first time in his time in Gladbach, deliberately refuses to give in to the demands of the fans. Many supporters have been demanding the immediate separation from Rose for two weeks. Now the series of defeats is added. The renewed Champions League qualification – actually Rose’s season goal – is realistically hardly achievable. «This is a difficult phase for us. We can’t talk that away “, well-known right-back Stefan Lainer:” It’s extremely bitter. “

Terzic: It’s about helping my team, in whatever role, to achieve success »

The mood at BVB, which recently found the right footing, is completely different. The current coach Edin Terzic, Rose’s assistant next season, remains modest after the game. In an interview with “ARD” he says: “Dortmund has beaten Mönchengladbach. It’s about helping my team to achieve success in whatever role. I don’t care which job title I have with me. ” So nothing should stand in the way of a harmonious collaboration with Rose.

DFB-Pokal – quarter-finals at a glance

Police operation in Stuttgart: That’s why a helicopter circled over the...

Rush to hair salons before lockdown

Lockdown for chickens, geese and the like: bird flu is spreading...