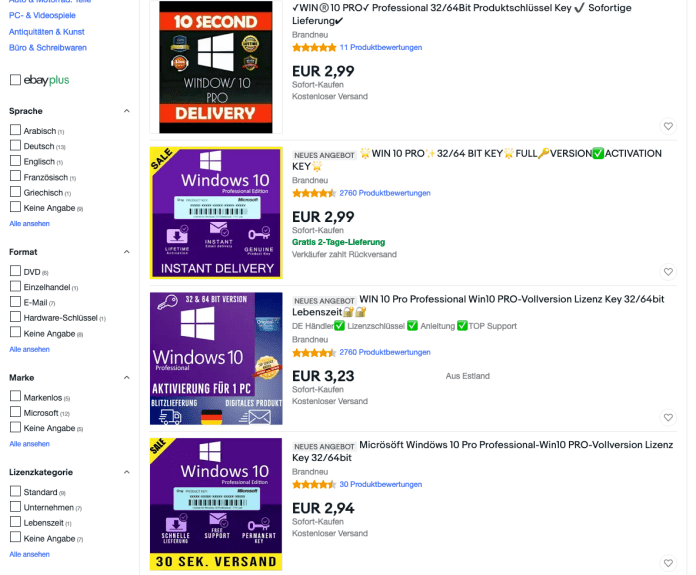 Compared to golem.de, the public prosecutor in Koblenz announced that they alone had submitted over 10,000 cases to the responsible public prosecutor’s offices. It is about the illegal acquisition of Windows 10 license keys along with Office packages on eBay & Co.

Be careful when buying noticeably cheaper licenses for Windows 10 or Microsoft Office!

The Central Office for Commercial Criminal Matters of the Koblenz Public Prosecutor’s Office is responsible for the entire district of the Koblenz Higher Regional Court and thus also for processing all commercial criminal cases from the districts of Bad Kreuznach, Mainz and Trier. It got there “Numerous scope proceedings” given because of dubious license keys for Windows 10 or Office packages, it was said in response to Friedhelm Greis’ press inquiry. The many letters that were sent became known in the media after a reader in the public group at Telegram reported to us that he had received such a letter.

In the past, the proceedings were regularly submitted to the responsible public prosecutor’s offices at the buyer’s place of residence. Overall, the number of cases submitted should be in the low five-digit range. According to the answer to the press inquiry, several criminal proceedings are currently pending for these same offenses. That means: Buyers of dubious Windows 10 keys still have to expect a letter in which they are summoned to the local police station for an interrogation.

Probably you evaluate the data of a seller and follow the principle of legality. Accordingly, every authority must open an investigation if there is an initial suspicion. If you have received countless customer data from a seller who has sold you the license key for far less than the official sales price, this would be a legally valid initial suspicion.

Attorney Tobias Kläner announced to Golem that because the investigations were not very productive, there were also house searches in a few individual cases in Rhineland-Palatinate in order to substantiate the initial suspicion. As a rule, however, the subpoena was apparently sent, similar to previous customers of illegal IPTV or card-sharing offers.

Most buyers should have bought the keys in a private setting for their own use. If you have not traded Windows 10 keys or have used them for your own company, the penalty also depends on whether the suspect has a criminal record. It is also decisive whether the accused has made a confession to shorten the procedure. On the other hand, anyone who buys such licenses more often must expect higher penalties.

It is of course particularly interesting from a criminal law point of view for the sellers of dubious software in large quantities.

Online marketplaces are part of the problem

It is very unfortunate that no online trading platform has put a stop to the sale of the dubious Windows 10 keys. With the exception of Amazon, they don’t even try that, at least nothing is seen of any efforts. Just look for it yourself. On eBay you are thrown straight away with shady offers. You can even choose the Price Below Five Euro option to see the cheapest keys! From 2.94 EUR there is everything your heart desires, including instant delivery.

If the offer would be far below Microsoft’s sales price, because eBay would block such dealers, there would be no nasty surprises with the recipients of the letters.

eBay & Co. clearly benefit from the problem. But they are clearly not living up to their responsibilities. Or how do you see that? Should the online retailers also be held liable if this is legally possible? Write us your opinion.

VW shares in demand again – Porsche is now also in...

When purchasing online: Authentication of the credit card is mandatory

Biden campaigns for Democrats ahead of Georgia’s runoff election

SHE Japan Studio loses another talent –

EANS-DD: voestalpine AG / notification of proprietary transactions by executives in...