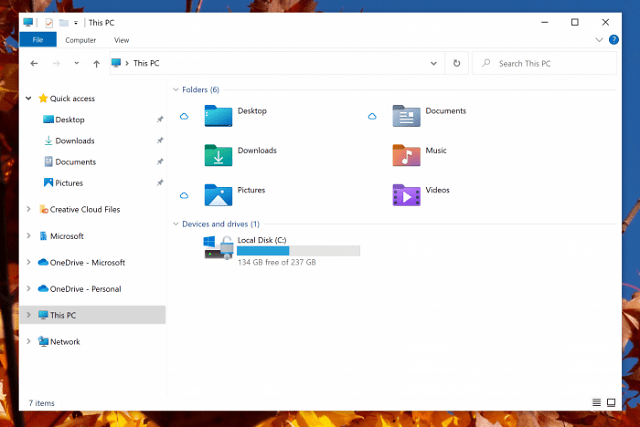 We recently reported that Microsoft is currently working on a redesign of the Windows 10 user interface. So it should be about the “radical rejuvenation” of the graphical user interface of Windows 10. Part of the redesign also affects the dark design, which is supposed to be more consistent. Now Microsoft has published new symbols in the file explorer in the new Insider build 21343 in the dev channel. There are new icons for the directories Pictures, Music, Documents, Videos, Downloads and Documents, all of which can be found in the subdirectory C: Users . There are also new symbols for the drives and the trash. The idea is that in the future it should be easier for users to tell the symbols apart, as insider boss Amanda Langowski writes. The new icons will be part of Windows 10 Version 21H2, which will be distributed to Windows 10 users as a free, optional feature update in the second half of 2021.

Even with the earlier preview version Build 21327 of Windows 10, the fonts in the start menu, in the settings app and in many other places in the operating system are in the Segoe font. In addition, the icons are designed with rounded corners. All new system icons are now in the so-called fluent design, which Microsoft started as an open source project in 2017. The Fluent Design System was deliberately developed as open source and can also be used by websites.

The rounded corners generally appear to be a design element of the “Sun Valley” graphical user interface. For example, all context menus, the notification center and the windows of programs should have the more rounded design. What is certain is that Windows 10 Version 21H2 will have the Auto HDR feature that can be activated as an option, so that users of an HDR monitor can provide their PC games with an automatically generated extended color space.

Will there be a new file explorer in Windows 10 version 21H2?

It could also be that File Explorer is being revamped and made more accessible in terms of accessibility. In celebration of one billion devices with Windows 10 installed, Head of Devices & Windows Panos Panay shared a video on Istagram.


The file explorer is not only based on the start menu, but above all is easier to use with a touchscreen. In the left column there is the directory structure, which is now kept in the style of the start menu. The column with the open folder, on the other hand, looks familiar and has a menu bar with options that can be folded out. It may be similar to that in the Office programs, so that you can choose how much space you want between entries. The aim is to make Windows 10 usable for everyone – including people with disabilities – and to offer various display options for the mouse pointer.

In addition, Microsoft is experimenting with the power menu, in addition to options for turning off the PC Allow apps to restart automatically. To do this, you just have to select the corresponding entry, then open apps automatically restart when the user logs in on the PC. However, the option currently has to be activated manually before you can see the entry in the power menu. In addition, the experimental feature currently only works with pre-installed Windows apps such as Microsoft Edge or the calculator app.

Collection for Insider Build 21343 for Windows 10:

In short: “We need more vaccine in the EU” – Coronavirus...

The 25 strangest failures in Formula 1 history

Matthias Reim is not averse to the seventh child