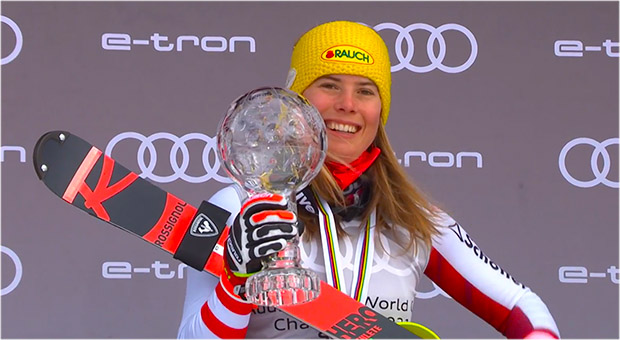 Lenzerheide – If you take a closer look at the slalom results of the Austrian Katharina Liensberger, which she achieved this winter, you can see that the Vorarlberg woman, who will be 24 on April 1st, has a consistency that is second to none. She always finished in the top four in all races. Only once, just when she was fourth in Jasna, did she not land on the podium. At the World Ski Championships in Cortina d’Ampezzo, she was delighted with the gold medal in slalom. There was also another gold medal in the parallel competition and the bronze medal in the giant slalom.

Now the lady from the Ländle crowns herself by winning the small crystal ball. She has more than earned this coveted award due to the outstanding results. The ÖSV women could also be proud of their team leader, because it almost looked as if the red-white-red women would not win this year. But Liensberger struck at the crucial moment and immediately ensured that her superior Peter Schröcksnadel could give up the office of ÖSV president without worries.

The farce shortly before the start of the 2019/20 World Cup season, when she wanted to change equipment and had no preferred shoe equipment contract, is forgotten. Liensberger has arrived in the concert of the greats. The excellent results of the World Cup winter whet the appetite for more; the Olympic season 2021/22 can come. And anyone who knows the motivated ski racer from Göfis knows that she will get everything and much more out of herself here too.

All data are updated immediately upon receipt

Marco Odermatt or Pinturault – who will win the overall World...

Laura reveals whether she is still happy with the Wendler –...

Violation of data protection: This is how Tesla cars monitor Switzerland