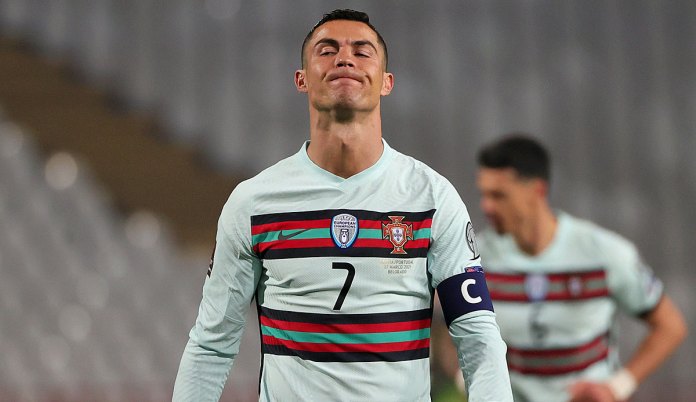 Portugal are deprived of their late 3-2 win against Serbia. Cristiano Ronaldo is beside himself and couldn’t calm down after the final whistle. Norway falls 3-0 against Turkey under the wheels. After the false starts in the World Cup qualification, Croatia and the Netherlands are doing purely compulsory tasks. A referee is also making history in Amsterdam.

Portugal missed an optimal start to qualifying for the 2022 World Cup in Qatar. After the 1-0 mandatory win against Azerbaijan, the team around Cristiano Ronaldo lost a 2-0 lead in the top game in Belgrade against Serbia in a 2-2 (2-0) lead and had to be satisfied with second place in the table in Group A.

In the third minute of stoppage time, Ronaldo scored the alleged 3-2 winner. Despite an attempted rescue act, the ball had rolled clearly over the goal line. However, the team of referees let go and did not give the hit. There are still no technical aids in qualifying for the World Cup. Ronaldo then complained loudly to the linesman and saw the yellow card. After the final whistle he marched furiously towards the cabin and threw his captain’s armband on the ground.

The superstar from Juventus Turin also added on social media: “I give and will always give everything for my country, that will never change. But there are difficult moments that have to be dealt with, especially when you feel has harmed an entire nation. ” wrote Ronaldo on Instagram.

Belgium fails against the Czech Republic

Belgium, who were third in the World Cup, did not get beyond a 1-1 (0-0) win in Group E in the Czech Republic. The world number one is tied behind the Czechs in second place.

Czech Republic – Belgium: The highlights in the video

Norway goes down against Turkey

After the false start in the World Cup qualification, the Dutch national soccer team recorded a mandatory win in front of spectators in the Amsterdam Arena. Three days after the 2: 4 bankruptcy in Turkey, Oranje won 2: 0 (1: 0) against Latvia in front of 5000 fans who were allowed in a model test. The French Stephanie Frappart made football history as the first female referee in the men’s World Cup qualification.

At the top of the table in Group G was Turkey, who beat Norway and Borussia Dortmund’s goal machine Erling Haaland 3-0 (2-0) in Malaga. Montenegro follows with equal points after the 4: 1 (2: 1) against the blatant outsider Gibraltar.

Steven Berghuis gave Elftal the lead (32nd) after ex-Bremer Davy Klaassen hit the bar (27th). The former Gladbacher Luuk de Jong also failed for the oppressively superior hosts initially with a header on the aluminum (40th), later he scored the 2-0 (69th). Ozan Tufan (4th / 59th) and Caglar Söyüncü (28th) scored for the Turks in Spain, while Norwegian Kristian Thorstvedt saw the red card for serious foul play just 13 minutes after being substituted on.

Even before the kick-off, the Dutch and the Norwegians had set an example. Haaland and Co. once again called for the protection of human rights in Qatar and asked on their T-shirts: “Norway, Germany – who will be next?” Oranje advertised at the same time with the slogan “Football Supports Change”, which is intended to initiate a campaign of the same name. The DFB-Elf had joined the protest of the Norwegians with the message “Human Rights” on Thursday before the game against Iceland (3-0).

Norway – Turkey: The highlights in the video

Vice World Champion Croatia has reported back with an arduous victory after the surprising 0-1 bankruptcy at the start of the World Cup qualification against Slovenia. The team around the Wolfsburg Josip Brekalo defeated Cyprus 1-0 (1-0).

Leader in Group H is Russia, which put an end to Slovenia’s successful streak. After nine games without a defeat, the Slovenes lost 1: 2 (1: 2) in Sochi. Goalkeeper Jan Oblak’s run without conceding also ended after 664 minutes. Artyom Djuba gave the Russians the lead in the 26th minute and increased nine minutes later. Josip Ilicic only managed the connection goal (36th). Mario Pasalic (40th) scored for the Croatians.

World Cup qualification: All games on Saturday at a glance

On average 101 corona fatalities per day

AvaTrade is expanding its offering to its customers with reduced spreads...

Where there is a threat of snow and black ice in...

Outpost of mankind is allowed to stay in space even longer