Police found a seriously injured person in a park on Kuckhoffstrasse in Niederschönhausen. Rescue workers brought the woman to the clinic.

As the police announced on Saturday, emergency services had heard cries for help from a green area on Kuckhoffstrasse on Friday night. A 52-year-old woman lay next to a park bench and complained of back pain.

Rescue workers took the drunk woman to a hospital, where a life-threatening stab wound was found in the woman’s back. She was sent to another hospital for emergency surgery.

Before that, the seriously injured woman could indicate that she was attacked by young people with a stun gun and that her handbag was stolen. It is being investigated on suspicion of serious robbery.

Senator runoff in Georgia as a showdown for all power

USA: A country on alert

Outrage on the net: Austrian ski area advertises with “Flatten the...

Nintendo is now boxing us out of lockdown – game tests 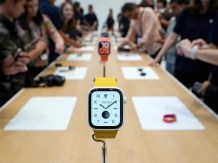