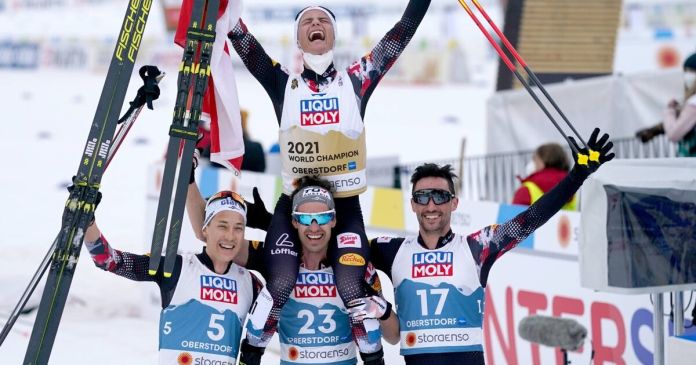 The Tyrolean Johannes Lamparter sensationally won the gold medal in the large hill competition of the Nordic combined athletes at the World Championships in Oberstdorf. The 19-year-old, who laid the foundation stone with an impressive 138.0 m jump, also shone on the trail and finally prevailed 37.1 seconds ahead of Jarl Magnus Riiber and 45.8 seconds ahead of Akito Watabe.

Just a few days ago, Bernhard Gruber, Austria’s only individual world champion in Nordic combined, announced his resignation. On Thursday, this complex sport saw the birth of a new ÖSV star. Johannes Lamparter triumphed in the large hill competition at the World Championships in Oberstdorf. Even the jump from the Schattenbergschanze was excellent, as the leader the Tyrolean went into the cross-country ski run and was also the best there. For the 19-year-old Tyrolean, it is by far the greatest success after the junior world championship title. Lamparter has not yet won the World Cup. Season dominator Jarl Magnus Riiber from Norway had to be satisfied with silver, the Japanese Akito Watabe with bronze. The second best Austrian was Mario Seidl from Salzburg in twelfth place.

Deutsche Post announces change: YOU will also benefit from it

Heavily fallen ski jumper Tande should be awakened from his coma

Pietro Lombardi reveals the downside of his success: “I’m lonely”

Europe wants to talk about an export ban on corona vaccines