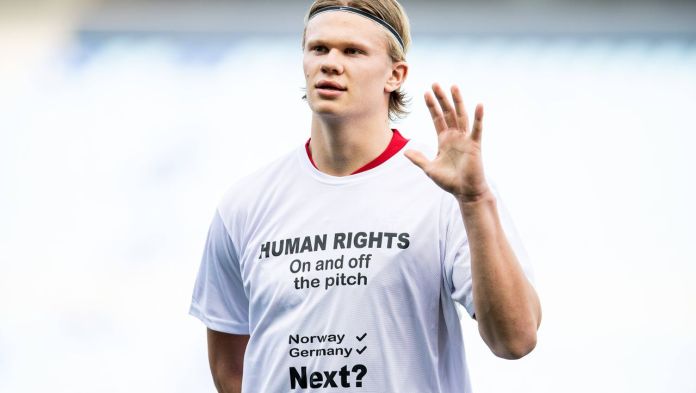 When qualifying for the 2022 World Cup, messages are piling up towards the host Qatar. The Norwegian national team called on other teams to take part in the actions. The Netherlands followed suit, Denmark announced its support.
Norway’s team around BVB professional Erling Haaland called for human rights to be respected before the game against Turkey. During the national team, like last time before the game against Gibraltar, the team showed T-shirts with the inscription “Human rights on and next to the field”. Underneath was a new message. There was a tick behind the words Norway and Germany, underneath it read: “Who will be next?”
The German national team had last shown T-shirts with the message “Human Rights” before the game against Iceland, but without clearly naming the addressee Qatar. The action was therefore also criticized, including by SPIEGEL. A marketing video also contradicted the impression of a spontaneous action.

The new shirts of the Norwegians were to be understood as an invitation to other teams to also participate in the embassies to Qatar. The Dutch, who met Latvia in Amsterdam, did so at the same time. The slogan “Football Supports Change” was to be read on the shirts of the players, which is supposed to initiate a campaign of the same name. Denmark is also participating in the campaign, with other teams to follow.

The slogan was also featured on armbands. »We wear these pads to support freedom, tolerance and inclusion. Football should support change. Also in Qatar. In Qatar we want to become world champions, but not without thinking outside the box, ”said a statement from the new movement. The Dutch association KNVB declared that it had already opposed the World Cup host Qatar in 2010.

There will also be protests in support of the workers in Qatar on Sunday by the Danish national team before the World Cup qualifier against the Republic of Moldova. “The players have decided to point out the need for changes in Qatar,” said the Danish association.

Qatar is repeatedly criticized internationally for the exploitation of guest workers. According to research by the Guardian, more than 6,500 guest workers from five Asian countries have died in the past ten years. In recent years, there has also been repeated research by the media and human rights organizations that reported glaring grievances. Accordingly, workers were not paid their wages, and passports were confiscated to prevent them from leaving the country. Accommodation and working conditions were precarious, and there were the deaths mentioned. According to reports, Qatar has so far only inadequately implemented announced reforms.

“I got fat from Corona”

Britain faces shortage of vaccines, according to the NHS

Don’t be afraid of the consequences – crime is increasing around... Schlagerchampions: Where did the NO ANGELS go? And: also announced...

The AstraZeneca vaccine is also designed to protect the elderly