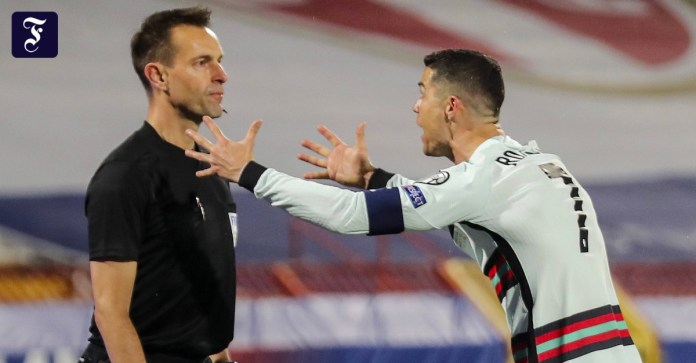 KShortly after the 2-2 defeat in the World Cup qualifier in Serbia and the resultant missed victory, soccer star Cristiano Ronaldo had his head clear again for a message to the nation: Especially in difficult times, you have to face the next challenge, said the captain of the Portuguese national team via his Instagram account late on Saturday evening. The 36-year-old said he had the feeling that an entire nation was injured.

Immediately after the event, he had perceived the matter differently: angry Ronaldo stormed off the lawn, threw away the blue captain’s armband, and waved his arms in frustration before leaving the catacombs of the Belgrade stadium. The soccer superstar was pissed off.

The score was 2-2, the Serbs had made up a 0-2 deficit and referee Danny Makkelie let play for four minutes. Ronaldo volleyed a wide cross at the baseline, curled the ball towards the goal, the ball rolled over the line – 2:51 minutes were replayed. Typical Ronaldo.

The Portuguese cheered because the ball was fully behind the line. This was also shown by the often repeated TV pictures. But the Dutch referee Danny Makkelie did not give the goal. Only yellow – for Ronaldo because of a complaint. The video evidence could have cleared up the matter, but it didn’t exist. Makkelie had neither the video assistant referee (VAR) nor the goal-line technology available.

The fact that he threw away his captain’s armband was by no means meant symbolically, Ronaldo hastened to clarify. Because being the captain of the Portuguese team is for him the greatest pride and privilege of his life, Ronaldo assured on Instagram.

Will this former Stuttgart coach become the new coach?

After the elections: the Netherlands faces an uncertain future