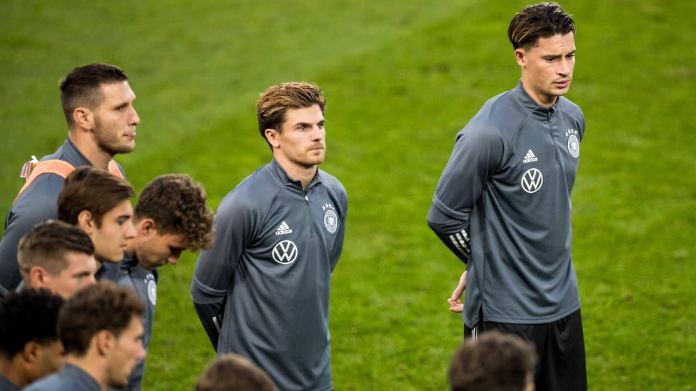 There is a corona case in the German national soccer team on matchday. Jonas Hofmann, who tested positive, is symptom-free and was immediately isolated. Contact person Marcel Halstenberg is also in quarantine. The game against Iceland in the evening should still take place.
Great excitement, but no rejection: Despite a corona case within the German national soccer team, the start of the World Cup qualification will take place as planned on Thursday evening. National coach Joachim Löw has to do without two other players against Iceland in Duisburg (8.45 p.m. / RTL). As the German Football Association (DFB) announced, the test of a national player who was initially not named was positive. The symptom-free professional was immediately isolated, later the association confirmed that it was Jonas Hofmann. “It will definitely be played,” said DFB spokesman Jens Grittner after consulting the Düsseldorf health department.

Marcel Halstenberg was also classified as a category 1 contact person, he had to go to quarantine immediately in the quarters of the DFB team. So he is not available for international matches either. The rest of the team and the functional team were tested negative again today, Thursday, according to the DFB. In any case, Toni Kroos, Niklas Süle and Robin Gosens, who have already left, are missing due to injury.

The DFB, which has moved into its team hotel in Düsseldorf, immediately contacted the local health department to coordinate the procedure. “This news is of course bitter so shortly before the game – for the coach and the entire team,” said DFB director Oliver Bierhoff. However, the association is in good spirits, “that it will remain with this single case, since we have so far carried out all hygiene measures in a very disciplined manner. Of course, we will implement all the requirements of the authorities”.

In the run-up to the three international matches (March 28 in Romania, March 31 against North Macedonia), the question of how to deal with the five “Englishmen” had caused a stir. The Premier League professionals İlkay Gündoğan, Timo Werner, Kai Havertz, Antonio Rüdiger and Bernd Leno were allowed to play despite the United Kingdom being classified as a virus variant area.

Although the classification has since been lifted, the quintet is in “work quarantine”. The players isolate themselves again within the already existing DFB bubble. Contact with fellow players is only intended during training, meetings and games.

As early as November 14, during the Nations League game against Ukraine in Leipzig (3: 1), after several corona cases in the opposing team, it was unclear whether the game could take place until the afternoon of the game day. It took place – later several players deployed by Ukraine tested positive.

On Thursday, the DFB again outlined its “strict hygiene concept”, which is aimed at avoiding category 1 contacts: “The measures that are being implemented include the permanent wearing of FFP2 masks, except when eating at the table . ” In addition, “staying in closed rooms in fixed, narrow time windows, keeping a distance in all functional rooms in the hotel, the use of two team buses and several vans for the trips to the training ground as well as close-knit tests,” announced the association.

Since the national team met on Monday, two PCR and one antigen rapid tests have been carried out on all players, according to the DFB.

Maurice Grange: Young magician conjures himself up for success – Sillenbuch