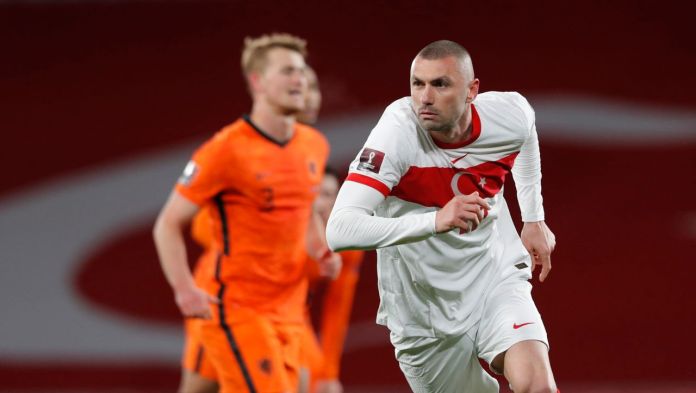 The Netherlands missed the 2018 World Cup, and they want to be back in 2022. But the way to Qatar will not be easy, as the first game of the qualification showed: The Dutch national team lost 2: 4 (0: 2) at the start against Turkey in Istanbul. The hosts’ match winner was Burak Yilmaz from Lille OSC with three goals (15th minute / 34th, foul penalty / 81st). Former Bundesliga professional Hakan Calhanoglu scored 3-0 right after the restart (46th).
The hopes of the guests for at least one point were not fulfilled even after the goals of the substitutes Davy Klaassen (75th) and Luuk de Jong (76th). The game in Group G was the first in European qualification for the 2022 World Cup in Qatar.
Coach Frank de Boer had done without striker Wout Weghorst from VfL Wolfsburg, which had caused some criticism in the Netherlands. Weghorst has already scored 17 goals for VfL in the Bundesliga.

The Netherlands missed the 2016 European Championship and the 2018 World Cup; but they have qualified for the EM, which has been postponed to 2021. On Saturday the team will play against Latvia in Amsterdam and three days later in Gibraltar.

World champion France missed the hoped-for home win at the qualifying start because of an own goal. The team of coach Didier Deschamps had to be content with a 1-1 (1-0) win against Ukraine in the opening game of Group D in Paris. FC Barcelona’s Antoine Griezmann gave the French the lead in the empty Stade de France (19th minute); at the surprising equalizer Presnel Kimpembe falsified a shot into his own goal (57.).
With a 1-0 (1-0) win against outsiders Azerbaijan, the World Cup qualification for European champions Portugal started successfully. For the victory in Group A, however, the team around superstar Cristiano Ronaldo needed help from their opponents. An own goal by Maxim Medvedev (37th) decided the game in Turin.
Qualifying guest Qatar won their first game against Luxembourg 1-0 (1-0). Mohammed Muntari (13th) scored the decisive goal. Qatar is automatically qualified as a World Cup host, but may participate in the qualification as a guest at the invitation of UEFA in order to prepare for the tournament. Among other things, the team will also meet Portugal.
Europe has only 13 places available for the 2022 World Cup. The 55 participants were drawn into ten groups of five or six. Only the ten group winners are directly qualified for the World Cup.

Who is this unknown dead person? Berlin police asks for...

On the trail of the gold coin: Police searched several jewelers...

Luka Jovic apparently before returning to Eintracht Frankfurt on loan